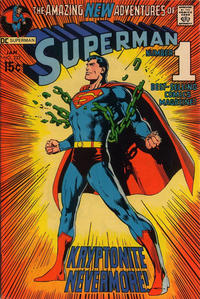 Either you haven't seen a paper or you can't read!

-- Superman upon eating a piece of Kryptonite.

The first part of the Sandman Saga storyline, Superman helps out with an experiment involving Kryptonite as an alternative power source when the experiment goes haywire, the energy harnessing machine about to explode. Superman tries to contain the explosion, but fails, being knocked out by the force of the blast and by exposure to the Green Kryptonite. Strangely, the explosion also causes all forms of Kryptonite on Earth to transform into harmless iron, which in turn is interpreted as Superman now being totally invulnerable.

Clark Kent is now hired on by Morgan Edge as a television reporter for WGBS, and his first assignment is to cover an experimental mailing rocket that will travel from Metropolis to Los Angeles. When Clark spots some would-be saboteurs who want the rocket for their own purposes, he goes into action as Superman and tries to stop them. However, he begins to notice that his heat vision powers no longer work, as well as a temporary drain on his physical strength powers. As he returns to Metropolis fulfilling his job reporting the rocket launch, a figure resembling Superman made of sand emerges from where he had been laid following the Kryptonite energy machine explosion and starts wandering about.

After graduating from the Memory Center, Jor-El is assigned to the Kryptonopolis Space-Complex, at which he creates an anti-gravity drive and uses it to power a spaceship constructed of gold. But Lara Lor-Van, an astronaut, stows away and causes it to crash on Wegthor, one of Krypton's moons. Jor-El stows away on another rocket three days later, and rescues her.

Retrieved from "https://heykidscomics.fandom.com/wiki/Superman_Vol_1_233?oldid=1380801"
Community content is available under CC-BY-SA unless otherwise noted.