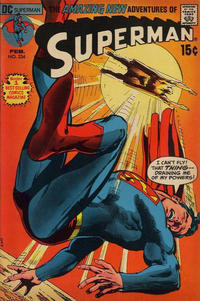 Appearing in "How to Tame a Wild Volcano!"Edit

Synopsis for "How to Tame a Wild Volcano!"Edit

The second part of the Sandman Saga storyline, Clark Kent is now sent by WGBS to a South Seas island owned by an unscrupulous tycoon, to cover a volcano that's about to explode. As Clark goes to the island as Superman, he not only deals with the tycoon shooting any of the island citizens trying to leave as well as Superman trying to help, but he also deals with more of his powers failing at inopportune times as he tries to put out the volcano. As he succeeds in both putting out the volcano and having the tycoon being brought to justice, the mysterious sand-created Superman figure rests within the heart of the volcano, molding himself further into the likeness of the Man of Steel.

Appearing in "Prison in the Sky"Edit

Synopsis for "Prison in the Sky"Edit

Tron-Et wins an election to the Science Council and proposes that overcrowding in prisons be alleviated by using his dissolver-ray to execute condemned criminals. Jor-El and others oppose the death penalty, and Jor counter-proposes using a suspended animation gas of his own discovery on such prisoners, which may have the side-effect of reforming their personalities, and shooting them into space in capsules, to be brought back to Krypton when their sentences are over. Tron-Et is secretly the boss of a criminal organization and wants crooks who know his secret to be executed before they can betray him. Thus, he stages an "accident" which makes it seem as though Jor-El's first experimental subject has gained super-powers and remained criminal after his capsule crashes. But Jor-El learns that the prisoner's "powers" came from a concealed anti-gravity belt and captures him. The prisoner exposes Tron-Et as his boss, and, after confessing, Tron-Et is sentenced to suspended animation in another capsule as Jor-El's proposal for punishment is accepted.

Retrieved from "https://heykidscomics.fandom.com/wiki/Superman_Vol_1_234?oldid=1380802"
Community content is available under CC-BY-SA unless otherwise noted.