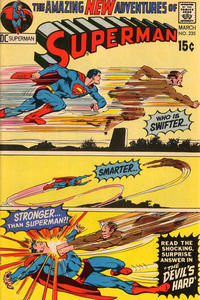 Appearing in "Sinister Scream of the Devil's Harp!"Edit

Synopsis for "Sinister Scream of the Devil's Harp!"Edit

The third story in the Sandman Saga storyline, Superman deals with a would-be musician whose incredible talent for music was actually stolen from a talented musician with the help of the mystical Devil's Harp. However, at the concert where the musician played, his moment of fame was taken from him when Superman interrupted the assassination of a visiting Middle East emir, making him jealous of Superman's abilities. Using the Devil's Harp, he began to steal Superman's abilities, eventually adopting the identity of Pan and challenging the weakened Superman to a match of abilities. However, just as Pan has the upper hand on Superman during the publicized match, the sand-created Superman figure emerges, takes the Devil's Harp, and destroys it, restoring to some degree Superman's own abilities before his duplicate vanished.

Retrieved from "https://heykidscomics.fandom.com/wiki/Superman_Vol_1_235?oldid=1380803"
Community content is available under CC-BY-SA unless otherwise noted.