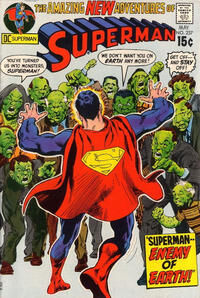 Appearing in "Enemy of Earth"Edit

Synopsis for "Enemy of Earth"Edit

In the fourth part of the Sandman Saga storyline, Superman rescues a space pilot from a failed test flight when he notices that the space pilot is mutated. Believing that he has carried space microbes with him in his reentry from space, Superman tries to cleanse himself of them by exposing himself to a radiation belt. As he returns to his civilian identity of Clark Kent at the WGBS news desk, he notices that the sand-created Superman figure is nearby and tries to make contact with him, but the moment he touches the figure, an explosion knocks Superman through the roof and into the WGBS building, where he causes more people to mutate.

Realizing that he is not fully cleansed of the microbes, Superman decides to exile himself into space where he can do no harm. However, he ends up seeing Lois Lane crash-land with a pilot into a Central American jungle where she is both attacked by terrorists and then later about to become a meal of millions of hungry ants. Though at first unable to help her, Superman discovers that only one of his hands is free of the mutating microbes, the hand that touched the sand figure. He again encounters the sand figure and this time triggers off an explosion that cleanses him completely of the microbes, but now has weakened Superman to having lesser abilities than before. He saves Lois and the downed pilot and bring them to safety. However, the sand figure appears unto Superman again, saying that he is now becoming him, and he fears that the two of them can't be in the same world together.

Retrieved from "https://heykidscomics.fandom.com/wiki/Superman_Vol_1_237?oldid=1380805"
Community content is available under CC-BY-SA unless otherwise noted.