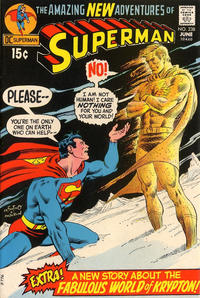 Appearing in "Menace at 1000 Degrees!"Edit

Synopsis for "Menace at 1000 Degrees!"Edit

In the fifth part of the Sandman Saga storyline, Superman must now deal with having abilities much closer to his original 1940s self as he handles terrorists who are using an experimental weapon that taps into the natural energy of the Earth's core. However, as Superman pleads with his sand-created duplicate to help him out, he refuses to do so as he does not share Superman's passion for protecting his adopted world. As Superman ends up resorting to using a disguise in order to foil the terrorists, Lois Lane is left wondering why Superman didn't deal with them the way he normally would do so with his powers, and Superman feeling less confident about himself to even tell her why.

Appearing in "A Name Is Born"Edit

Synopsis for "A Name Is Born"Edit

A Kryptonian teacher relates the legend of Kryp and Tonn, two space explorers who landed on ancient Krypton and became the progenitors of the Kryptonian people.

Retrieved from "https://heykidscomics.fandom.com/wiki/Superman_Vol_1_238?oldid=1380806"
Community content is available under CC-BY-SA unless otherwise noted.