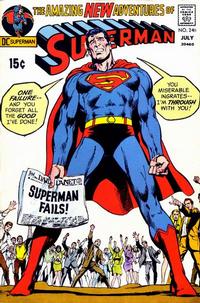 Appearing in "To Save a Superman"Edit

Synopsis for "To Save a Superman"Edit

Superman suffers a humiliating loss of face as he fails to stop a burning building from completely collapsing. Yet even as he contemplates letting humanity fend for itself as a way to placate his wounded pride, Superman decides to use what's left of his waning powers to stop a would-be bank robbery by the Anti-Superman Gang. Meanwhile, Diana Prince's mentor I-Ching comes on the scene to help Superman, as he suspects that Superman's loss of powers may be of a supernatural cause. Just as I-Ching is about to put Superman into a sleep, Anti-Superman Gang members break into I-Ching's basement residence and club Superman in the head. Though suffering a head injury and now down to merely regular human strength, Superman prevails in defeating the gangsters.

Appearing in "The Man Who Cheated Time"Edit

Synopsis for "The Man Who Cheated Time"Edit

Retrieved from "https://heykidscomics.fandom.com/wiki/Superman_Vol_1_240?oldid=1380808"
Community content is available under CC-BY-SA unless otherwise noted.