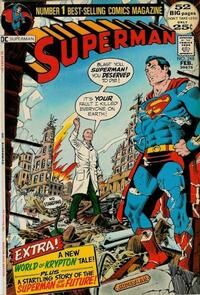 Appearing in "The Man Who Murdered the Earth!"Edit

Synopsis for "The Man Who Murdered the Earth!"Edit

Lex Luthor creates a Galactic Golem to destroy Superman, but believes he has destroyed the Earth as a result of their titanic battle.

Appearing in "All in the Mind!"Edit

Synopsis for "All in the Mind!"Edit

An archaeological team on Krypton discovers a record of how mutant children, exiled from the land of Xan during a war with Erkol, were the only survivors of that conflict and founded the city of Kryptonopolis.

Appearing in "Muto Versus the Man of Tomorrow!"Edit

Synopsis for "Muto Versus the Man of Tomorrow!"Edit

Retrieved from "https://heykidscomics.fandom.com/wiki/Superman_Vol_1_248?oldid=1380816"
Community content is available under CC-BY-SA unless otherwise noted.