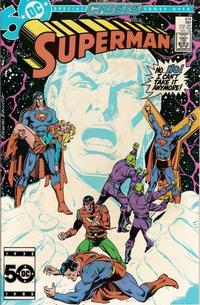 Appearing in "Revenge Is Life -- Death To Superman!"Edit

Synopsis for "Revenge Is Life -- Death To Superman!"Edit

In a storyline continuing from DC Comics Presents #87, the Man of Steel is held captive by the Superman Revenge Squad. He is taken to New Krypton, home of the Kandorians, and is forced to watch as the Revenge Squad attempts to conquer and destroy the planet. Eventually, they are thwarted by Sylvia (the wife of Superman's cousin Van-Zee). Superman brings the Squad to justice. Before leaving New Krypton for the last time, Superman retrieves Supergirl's body and leaves it with her natural parents, Zor-El and Alura.

Retrieved from "https://heykidscomics.fandom.com/wiki/Superman_Vol_1_414?oldid=1673444"
Community content is available under CC-BY-SA unless otherwise noted.