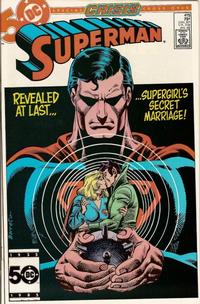 Appearing in "Supergirl: Bride Of- -X?"Edit

Synopsis for "Supergirl: Bride Of- -X?"Edit

Superman discovers an intruder, Salkor, an alien, in his Fortress, taking a round metal object from the Supergirl room. Superman learns that Salkor is really Supergirl's husband, whom she married while she was rendered amnesiac from a collision with a Kryptonite meteor. Salkor had called her "Jasma", and, while married to her, had fought side-by-side with her against the menacing invader, Naxx. The round object was a Hokku, a wedding day gift that recorded the thoughts of his beloved. Shortly after the fight with Naxx, Supergirl left Salkor without an explanation, and it has taken him two years to trail her to the Fortress of Solitude on Earth. When Naxx finds Salkor and Superman and attacks them both, seeking vengeance, the two heroes team up to destroy their robotic foe. Later, Superman and Salkor see and hear a holographic recording of Kara, who explains that she lost her memories of Salkor and their marriage when her original memories returned, only to regain them after her original encounter with Blackstarr. Since she mentions in the message that she will probably be dead by the time they hear the recording, Salkor and Superman realize she must have had a premonition of her own death. Superman and Salkor bid each other farewell, and Salkor leaves Earth.

Retrieved from "https://heykidscomics.fandom.com/wiki/Superman_Vol_1_415?oldid=1381032"
Community content is available under CC-BY-SA unless otherwise noted.