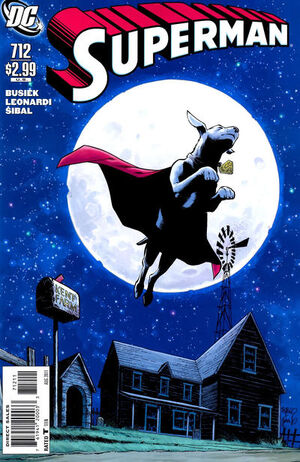 Appearing in "Lost Boy: A Tale of Krypto the Superdog"Edit

Synopsis for "Lost Boy: A Tale of Krypto the Superdog"Edit

Superboy and Krypto play across the skies of Smallville. Superboy throws a frisbee, but Krypto breaks it with his teeth. Superboy gets a manhole cover and throws it for Krypto to catch.

Later, Krypto is lying on the entrance of the Kent house. Jonathan and Martha remark that Krypto has been quiet ever since he and Superboy fought Superboy-Prime. In the morning, Krypto flies to the Titans Tower but leaves before anyone can notice him.

He then flies to several places he and Superboy went to together. He then arrives at a destroyed structure in the Artic. Using his x-ray vision and super smell, Krypto realizes that this was the place where Superboy died. Saddened, Krypto lets out a howl that is heard across the world.

Krypto then flies across the world to find Superman, but he doesn't find him. Sad, Krypto flies to an asteroid and goes to sleep there, with the manhole cover Superboy used threw at him.

Retrieved from "https://heykidscomics.fandom.com/wiki/Superman_Vol_1_712?oldid=1381107"
Community content is available under CC-BY-SA unless otherwise noted.