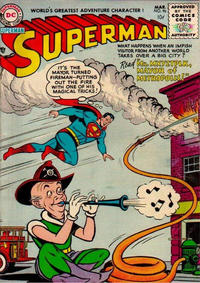 Appearing in "The Girl Who Didn't Believe in Superman!"Edit

Synopsis for "The Girl Who Didn't Believe in Superman!"Edit

When Superman learns that Alice Norton, a blind girl, does not believe in Superman, he tries and fails to convince her of his existence...until he operates upon her and restores her sight.

Mr. Mxyzptlk runs for and is elected mayor of Metropolis, takes on all the city jobs himself, and baffles Superman.

Appearing in "The Collector of Celebrities"Edit

Synopsis for "The Collector of Celebrities"Edit

A “collector of celebrities” forces Superman into an agreement to perform three “impossible” tasks or live in his house as his “property” for a year.

Retrieved from "https://heykidscomics.fandom.com/wiki/Superman_Vol_1_96?oldid=1380661"
Community content is available under CC-BY-SA unless otherwise noted.