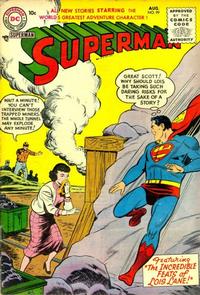 Appearing in "The Camera Club Scoops"Edit

Synopsis for "The Camera Club Scoops"Edit

While Superman is tracking down the Midnite Gang, amateur photographers in the Camera Club make life more difficult for him by pulling crazy stunts to catch a shot of him in action.

Appearing in "The 1,000 Lives of Superman"Edit

Synopsis for "The 1,000 Lives of Superman"Edit

Reporter Mona Miles is even more persistent than Lois Lane in trying to uncover Superman’s secret identity, so the Man of Steel adopts multiple secret identities to throw her off track.

Appearing in "The Incredible Feats of Lois Lane"Edit

Synopsis for "The Incredible Feats of Lois Lane"Edit

Lois Lane is convinced from a scientist’s report that she will die within a week of radiation exposure, and begins performing dangerous feats in order to get the last scoops of her career.

Retrieved from "https://heykidscomics.fandom.com/wiki/Superman_Vol_1_99?oldid=1380664"
Community content is available under CC-BY-SA unless otherwise noted.