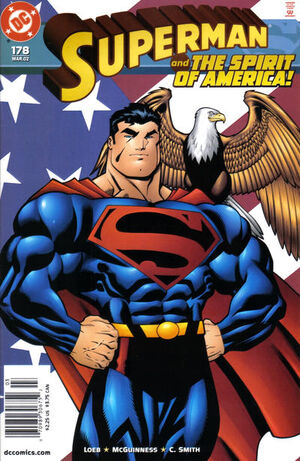 Appearing in "The American Way"Edit

Synopsis for "The American Way"Edit

In the Smallville General Store, Superman considers the pie flavors, arguing with himself about which is the best, finally settling on the apple. Outside of the building, a bright banner announces the grand re-opening of the store. Inside, Martha Kent serves up a big slice of apple pie. Jonathon warmly embraces his wife and then walks away to get some cheese for the pie. Whispering to his mother, Clark comments that his father seems in good spirits. Martha agrees, and then remembers how shocked she was when Jonathon told her he was going take over the General Store. Pa rejoins the two, and says the he's not sure whether or not he'll miss the farm, but every now and then you need to try something new.

In the White House, Luthor yells for Pete Ross to get into the Oval Office. When Pete gets in there, Luthor asks why Superman is in the same soda shop that Pete was nominated for VP in. Pete passes it off as Smallville being a small town, but Luthor argues that if they don't stay three steps ahead of the Man of Steel, then he will trip them up. Fumbling for words, Pete mutters that he always thought they were on the same side as Superman. The two men stare at each other for a moment, before Pete requests permission to leave. As Pete leaves the room, Luthor comments that in the Pentagon, the Vice President is referred to as being only a heartbeat away from being President. As Pete leaves the room, a tech enters in through another door. He tells Luthor that he works for the Satellite Recovery Division, reviewing aerial photos from the numerous satellites in orbit. Luthor snaps at him, questioning what in the world he could have that is important.

Back in Smallville, Superman leaves the General Store, declaring it officially open. Behind him in the crowd, a man slowly removes his jacket and hat. Rolling up his sleeves as he approaches the Man of Steel, the man tenses his muscles preparing for a fight. Without warning, the man launches three quick punches, sending Superman flying across the street. As Superman gets to his feet, the man taunts Superman, accusing him of not helping, and of being a non-interfering alien. As another punch comes in, Superman catches the punch, and tells Uncle Sam that he shouldn't hit a man when he's down.

Uncle Sam is caught unaware for a moment, as he tries to figure out what he was doing. Superman tells him that he has an idea, but they should go somewhere else. The two men vanish into the sky together, as Martha comes outside and offers everyone a slice of pie, on the house.

Back at the White House, Luthor looks over the photos from the technician. The tech says that they found these photos sifting through all of the data from the last forty years. Their best estimate of these is that they are about twenty-five or thirty years old. Luthor questions the markings on the "space ship" in the photo, and the tech says that due to their recent alliances during the war, he was able to identify the lettering as Kryptonian. The tech begins to spell it out for Luthor, but the President cuts him off. After questioning the man and ensuring that no one has heard about this, Luthor reaches into his desk and pulls out a gun.

In Topeka, Superman hovers next to Uncle Sam as they watch the reconstruction. Superman tells him that he is always most proud of who they are after a tragedy. He just wishes that they didn't need learn the lessons over and over again. Turning to Uncle Sam, Superman then tells Sam that some of the things he said weren't American, they were Lex Luthor corrupting him. Superman tells Sam that the President isn't America, the people are America. Sam agrees, but he remarks that now it is harder than ever, to be the Spirit of America. As Superman and Uncle Sam shake hands atop the Statue of Liberty, the Man of Steel tells him that he'll do fine, because one of the best things America does is endure.

In Tokyo, Clark and Lois meet in a movie theater and discuss the American way. Clark thinks that maybe it should be something more universal, but before he can get any further, they are being yelled at to get a room.

At night in the Oval Office, Luthor dismisses Mercy. As she leaves, he requests the she gets the maintenance team to clean the carpet. Turning to the pictures, Luthor views the pictures of a rocket penetrating the atmosphere, a close-up on the Kryptonian writing (reading "The House of Jor-El"), and a smoldering streak in the field of the Kent farm. Standing in the shadows, Luthor proclaims "Clark Kent is Superman..."

Retrieved from "https://heykidscomics.fandom.com/wiki/Superman_Vol_2_178?oldid=1461441"
Community content is available under CC-BY-SA unless otherwise noted.