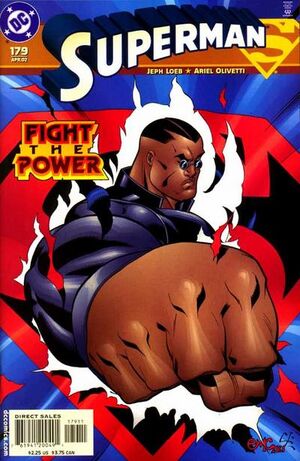 Appearing in "What Can One Icon Do?"Edit

Synopsis for "What Can One Icon Do?"Edit

In Dr. Claire Foster's office, Superman talks about Lois, and how he misses her, using cryptic language to mask his true identity. Foster asks him if he ever thinks about other women, to which Superman gives a sharp "No". Even Wonder Woman. Even Lana. They come to a general consensus that the rule of thumb is not what is done during their sessions, but the work that is done in between.

Superman, listening to radio bands, intercepts a cab robbery in progress. He stops the robber with his chest, who falls to the ground in a heap. The cabbie positively identifies the man, but seems astonished to see Superman in Harlem. So does a new arrival to the scene, Muhammad X, a man with a tight fitting black suit and sunglasses. He condemns Superman for even coming to Harlem, because he never did before, and for having starting to right now. Superman tells him about Cabwatch, a protection program made by Jason Diaz, but Muhammad X cuts him off. He tells that there are no mad scientists here. Meanwhile, the perp starts to run away. Muhammad taps him and makes him weigh twenty times more than he started. Superman asks him about his powers, and tries to start over. Muhammad closes all avenues of communication and asks Superman to leave.

In Venice, Lois has Clark turn around to see what is different about her. He notes her clothing. Then Lois brings her mother over, and Clark sees that they've both changed their hair. They fumble over how Clark got to Venice, and Clark asks Lois to talk in private.

Up in the air, Clark, in Superman costume, tells Lois that he's sorry he didn't notice the hair. He tells her about Muhammad X, and how he feels frustrated, because he sets out to inspire people, but he doesn't know if a white role model is the proper inspiration for black people. Muhammad has made him question his place as a role model. He worries that he doesn't understand African Americans. Lois suggests that he go talk to Steel and try to get another perspective. They kiss, and he drops Lois off. However, Lois' mother sees this.

At Steelworks, Superman finds that Steel is off testing the Aegis, so he asks Courtney and Natasha who the super-hero they look up to is. Natasha says Steel, and Courtney says Superman, after telling him not to get pig headed.

At the Watchtower, Superman asks Martian Manhunter about the whole affair. Speaking as a green man, he tells Superman that he isn't wrong for trying so hard. It just shows that he cares deeply about doing the right thing and that he deserves a chance to be a role model.

Retrieved from "https://heykidscomics.fandom.com/wiki/Superman_Vol_2_179?oldid=1461443"
Community content is available under CC-BY-SA unless otherwise noted.