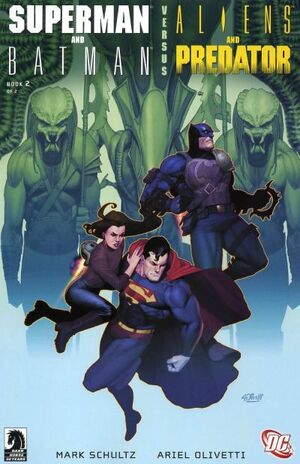 Superman and Batman versus Aliens and Predator Vol 1 #2
February, 2007

Appearing in "Superman and Batman vs. Aliens and Predator (Part II of II)"Edit

Synopsis for "Superman and Batman vs. Aliens and Predator (Part II of II)"Edit

Superman brings the Fortress of Solitude to the volcano of Viejo Abuelo in an effort to gather up the Aliens and Predators. The Terrestrial Defense Initiative (D.D.I.) fears that Superman's alien heritage might make him sympathetic to the extraterrestrial threat. Unwilling to take any chances, they decide to fire missiles at the volcano. Superman flies down inside where Batman has been patiently keeping the Predators calm. Recognizing that the Predators are an honorable, albeit violent species, Superman begins ushering them inside the Fortress of Solitude for safe passage back to their home star system. He sends Batman and Lois to the Fortress as well, while he in turn flies back down into the volcano to locate the Aliens. He asks the D.D.I. to give him an hour to clean up the mess before they strike again.

Superman finds an Alien nest and uses his arctic breath to freeze all of the eggs. He then scoops them up into a net and places them on board the Predator ship. He brings the ship out of the volcano and docks it alongside the Fortress. The Alien queen however, is still active and begins attacking Batman. Now he has both Aliens and Predators to deal with. Batman is prepared however, and withdraws specially designed hypodermics. He administers the drug to the Predators with satisfactory results, but the Alien queen proves more difficult. Batman cannot puncture the needle through her steel-hard shell. Superman eventually catches up with them and shoves the hypodermic deep inside the creature’s mouth. The queen finally succumbs to the drug's effects.

There are still several conscious Predators to deal with however. Superman activates a device, which floods the entire Fortress with a special gas that knocks them all out. The only thing left to do is to get them off-planet.

The D.D.I. is no longer going to wait for Superman to finish the job. They launch of series of heat-seeking nukes to target the Fortress of Solitude. Batman pilots the Fortress, while Superman pushes it far outside of Earth's atmosphere out of range of the nukes. They load all of the Predators back onto their own vessel and send them on a course towards their home planet.

Retrieved from "https://heykidscomics.fandom.com/wiki/Superman_and_Batman_versus_Aliens_and_Predator_Vol_1_2?oldid=1460774"
Community content is available under CC-BY-SA unless otherwise noted.