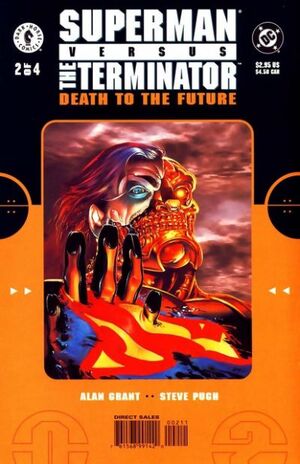 Appearing in "Death to the Future - Part 2"Edit

Synopsis for "Death to the Future - Part 2"Edit

It's Metropolis 2032 and a wrinkled, grey bearded Steel gives Superman the American flag to cover up his naked self. Steel explains that when they brought Superman into the future, they were actually trying to bring back an advanced Terminator. To do that they had to take over Skynet's time displacement facility, which is where they are. Skynet doesn't know they are even there because Steel has rigged the computer to send back false information. Superman is introduced to John Connor, now a grown man. Steel begins to explain that he always wondered why Superman disappeared in 2000. Superman wonders if that means he doesn't go back.

The two friends fly out through the night sky and look at the remains of the devastated Metropolis. Steel explains that not many heroes survived Skynet's take-over. Soon the pair arrive outside the remains of the Daily Planet building. Suddenly a net is thrown over them, and cannibals attack them. Superman soon rips the net open, and Steel frightens the men off. They climb inside the Planet and Steel gives Superman one of his old costumes. He had kept it as a symbol of hope.

Back in the past, Lois Lane meets up with the Connors in a bistro. Sarah has already filled Lois in on the details, and after making some calls, Lois asks after Superman. Lois suggests that they all stay at her apartment, as her husband is away on business.

Outside the Terminator, disguising as a policeman, has identified his target. He walks inside the bistro and walks over to the table that Lois and the Connors are seated at. Sarah quickly uses the table as a shield, but it doesn't last long. The Terminator begins to aim at Sarah, when Lois grabs a fire hose and blasts the Terminator with the water from it. Lois is unable to control the hose as the pressure is too strong, and the Terminator shoots the water supply out. As the Terminator begins to move in for the kill, the window is smashed open and Supergirl flies in. A brief struggle and a telekinetic blast put down the android.

Elsewhere, the Cyborg Superman meets with a Terminator himself, though this one is blonde and female. The pair team up. Wave after wave of Terminator will be sent back, leaving the female Terminator and The Cyborg open to strike. They mount up on their motorcycles and speed off.

Back in the future, Superman, Steel and the resistance all attack a Skynet Terminator production factory. It is well protected but they get inside, with the possible intention of capturing it and can use it themselves.

Back in the past, the Terminator is defeated, but John has disappeared. As the three women walk outside the bistro, they are attacked by yet another Terminator and it's after Supergirl. Her flame wings appear, Supergirl grabs the android and flies him up high above the streets and then drops him as he smashes on the floor below.

In 2032, as the heroes and resistance get inside, they meet up with a giant robot. He is the living embodiment of Skynet power: Sky-1 and he's been waiting for them. As Steel goes in to attack, he is zapped and left a heap on the floor. Superman suffers similar treatment. As much as he tries, Superman cannot defeat Sky-1 so he attacks the machines around it instead. Unfortunately, Sky-1 releases its ultimate weapon: Kryptonite.

Retrieved from "https://heykidscomics.fandom.com/wiki/Superman_vs_The_Terminator_Vol_1_2?oldid=1461658"
Community content is available under CC-BY-SA unless otherwise noted.