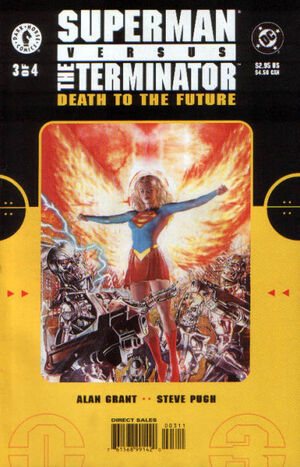 Appearing in "Death to the Future - Part 3"Edit

Synopsis for "Death to the Future - Part 3"Edit

Superman and Steel have been captured in 2032 by Sky-1, the living embodiment of Skynet. Sky-1 is busy downloading all the data from their brains so that it can use it to utterly destroy humanity, what it calls the "Omega Point".

In Metropolis, year 2000, Supergirl is busy fighting Terminators. They now have arrays that enable them to fly, and each time she defeats them, more turn up and they get harder to defeat. As Supergirl begins to get a little overwhelmed, Superboy arrives on the scene and the two soon finish off the Terminators. Supergirl fills Superboy in on the situation. The Terminators were after John Connor, now they are after her, and Superman has disappeared. Five more Terminators arrive.

The Cyborg Superman and the female SuperTerminator watch the battle for a while and disappear off to find John Connor.

Back in 2032, Steel manages to get the gag free from his mouth, and then uses voice commands to get his hammer to break him free. Freeing Superman, the pair begin to flee when Sky-1 returns and blasts them with the synthetic Kryptonite. Steel places himself between the rock and Superman. Superman uses his heat vision to cut at the Kryptonite, but it's not enough. Once again, Steel's hammer saves the day along with a dose of super-strength. With Sky-1 destroyed, Skynet tells the two heroes that they will never destroy all the machines in the world. Superman suggests that they make their own Omega Point.

Sarah Connor and Lois wait by the phone in Lois' apartment, waiting for John to phone. Lois is worrying about someone else who has also gone missing - Superman. The phone rings.

By Choke Street Station, John Connor begins to describe to his mother where he is. From out of the subway appears the female SuperTerminator, and using her olfactory system, smells John out. John runs, and finds a cement chute. He waits for the SuperTerminator and The Cyborg to get close enough, and then pulling out the release bar, dumps the cement on the pair of them.

Above the skies, Superboy and Supergirl are having their own problems. Supergirl crashes into Lex Luthor' offices and destroys a Terminator just as its about to kill Lex. Supergirl takes the opportunity to ask Lex for his help to defeating the Terminators.

Back in the future, Superman flies into the air carrying a bomb. As he throws it, it explodes causing a huge electromagnetic pulse rendering all unprotected machines inert. Superman, Steel, the future John Connor and resistance cells all over the world fight back and enable to win. All over the world people celebrate and then look on at their devastated world. It's not over yet though, as John points out. They don't know how many Terminators were sent back. One could still kill him in the past and it would all start all over again.

At a shielded Time Displacement Center, Steel and Superman say their goodbyes and the latter is sent back to the past, but John Connor is still concerned. Superman only saved him once in the past, and that's already happened.

Retrieved from "https://heykidscomics.fandom.com/wiki/Superman_vs_The_Terminator_Vol_1_3?oldid=1461662"
Community content is available under CC-BY-SA unless otherwise noted.