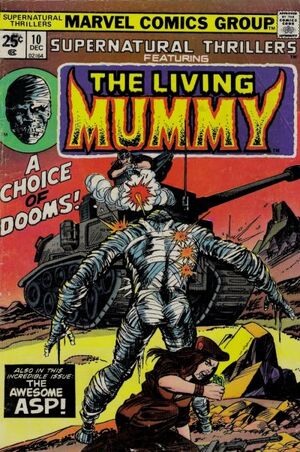 Appearing in "A Choice of Lions!"Edit

Synopsis for "A Choice of Lions!"Edit

Continued from last issue... As the Living Mummy walks across the desert in pursuit of the Scarlet Scarab. His mind wanders back through the ages to the days when he was only N'Kantu, and how he had to pass the rite of manhood when he was of age by slaying a lion on his own, a task in which he succeeded in quite easily.

Meanwhile, in the realm of the Elementals, the Elementals are furious that the Mummy does not follow their commands to the letter (including killing, which the Mummy has refused to do) and so they send Zephyr to the Earth dimension to regain control of the Living Mummy. Back on Earth, the Scarab has been pilfered by the Asp, a thief who hopes -- with the aid of his colleague Miles Olddan -- to sell the Scarlet Scarab only to steal it back and sell it over and over, hoping to make it rich. He rendezvous with Olddan and tells him of his encounter with the Mummy (who he knows is following him) and the two depart for the city to sell the Scarab to a prospective buyer.

While in the desert, the Living Mummy comes across a young soldier named Racha Meyer who is being chased by two men in a tank. When she realizes that the Mummy is immune to their bullets (And it doesn't seek to harm her) she uses the Mummy as a shield and blows up the tank with a grenade. She then thanks the Mummy for his help before the two part company.

Retrieved from "https://heykidscomics.fandom.com/wiki/Supernatural_Thrillers_Vol_1_10?oldid=1656446"
Community content is available under CC-BY-SA unless otherwise noted.