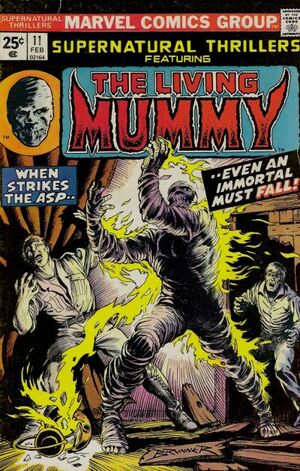 Appearing in "The Asp's Big Score!"Edit

Synopsis for "The Asp's Big Score!"Edit

Continued from last issue... The Asp and Morris Olddan have the Scarlet Scarab in their possession and are intending to sell it to Alexi Skarab, with the intent of stealing it back and selling it to another buyer. However, before they can be met by Skarab they are attacked by the Living Mummy, who has finally tracked the two down in it's hunt for the Scarlet Scarab. During the fight Olddan throws a oil lantern at the Mummy, causing it to burst into flames. The burning Mummy smashes out the wall and extinguishes the flames in the mud outside and passes out.

As Asp and Olddan leave, Asp reflects on the moments in his life that brought him to Egypt: He reflects on how he was a small time crook with big aspirations of finally getting the big pay out. When arrested for a crime, he had Miles Olddan as a cell mate and it was love. Olddan, an old time crook with plenty of skills took the young Asp under his wing and the two would mastermind their criminal career, however as Olddan aged, his direct involvement became less and less.

As Asp and Olddan sell the Scarab to Dr. Skarab, Zephyr has arrived in Cairo to collect the Living Mummy. Finding the creature in the mud, she uses her powers to heal him in preparation to recollect the Scarlet Scarab. When Olddan and Asp return to their room, they are ambushed by Zephyr and the Living Mummy. She forces Asp to take the Mummy and go try and retrieve the Scarlet Scarab from Skarab. However, the Mummy's less than graceful gait causes enough noise to rouse Alexi Skarab, who shoots the Asp in the arm. Conversing with the Mummy, he learns of the Elementals plot to obtain the Scarab and take over the Earth once more.

When the Mummy agrees to help them, they deduce that the Mummy is working for Zephyr alone and that she possibly has betrated the Elementals in order to save the Earth. Their suspicions are confirmed when the Elementals suddenly appear before them with Zephyr and Olddan as their prisoners.

Retrieved from "https://heykidscomics.fandom.com/wiki/Supernatural_Thrillers_Vol_1_11?oldid=1656444"
Community content is available under CC-BY-SA unless otherwise noted.