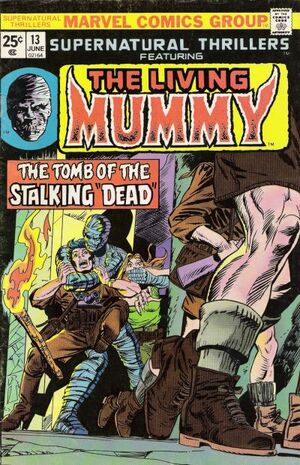 Appearing in "A Separate War"Edit

Synopsis for "A Separate War"Edit

Continued from last issue... Ron and the Living Mummy are returning to their friends hide-out after a failed mission to collect scrolls from the University of Cairo. Along the way they run into a group of men whom have sided with the Elementals and a fight breaks out. During the fight, Ron gets a hold of a gun and fires it at a man armed with a flame thrower. It hits the fuel tank causing an explosion, and Ron is mortified by being forced to kill the man in such a horrifying way.

They return back to where Professor Skarab and Janice are holed up, and catch a news report about the Elementals conquest of Cairo and how the rest of the world cannot penetrate the magical barrier around the city. Once more seeing images of Asp, Olddan and Zephyr being held prisoner by the Elementals rowels up Ron enough to want to go out and save them and leaves with the Mummy in tow.

They arrive at the new court of Hellfire, who has been spending his time since taking over Cairo lording over the people there, who now worship them. Ron gets fed up with the display and attacks with the Mummy. Their attack succeeds in freeing Asp, Olddan and Zephyr from their bonds and after a clash with Hellfire, Magnum and Hydron, they manage to escape thanks to Zephyrs powers. Arriving back at the hideout, they find that Skarab and Janice are gone without a trace.

Retrieved from "https://heykidscomics.fandom.com/wiki/Supernatural_Thrillers_Vol_1_13?oldid=1656440"
Community content is available under CC-BY-SA unless otherwise noted.