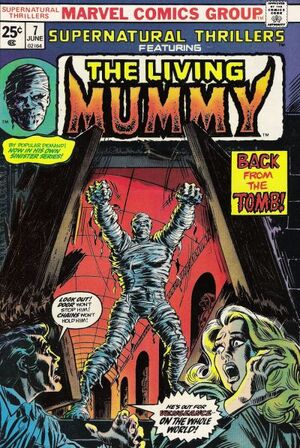 A woman's voice -- crying for help. Perhaps this will be an opportunity to make an aquaintance with a native of this awesome land -- one who will provide me with the answers I seek.

Appearing in "The Return of the Living Mummy!"Edit

Synopsis for "The Return of the Living Mummy!"Edit

The Living Mummy awakens inside of a crate in a museum in New York. He bursts free of his confines and begins wandering around the corridors. A security guard named Jones comes upon him, and flees in terror. He telephones the police, as well as the museum's curator, Dr. Carroll Harter.

Harter arrives at the museum, along with Alexi Skarab, but the Mummy is long gone. Skarab tells Harter the history of N'Kantu, and his recent resurrection and rampage in Cairo.

The Mummy meanwhile, wanders the streets of New York. He rests briefly in Central Park, until he finds two young thugs hassling a woman. The Mummy approaches them, but the thugs (as well as the woman) flee in terror. N'Kantu has no idea why they are so scared of him.

The two punks run into a police officer and explain what they had just seen. The officer radios the incident into headquarters and drives on to investigate.

Several squad cars converge on the scene and open fire on the Mummy. Several bullets strike a nearby vehicle, causing it to explode. In the midst of the explosion, the Mummy takes the opportunity to escape down a back alley.

Retrieved from "https://heykidscomics.fandom.com/wiki/Supernatural_Thrillers_Vol_1_7?oldid=1656449"
Community content is available under CC-BY-SA unless otherwise noted.