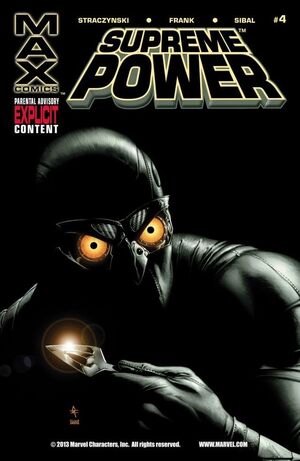 General Casey of Project Hyperion arranges a tight and secret meeting with Mark's foster parents in which he decided it is a delicate time for Mark to lose his parents and allowing him to rely more on America as his spiritual parent, which would help him to understand that he belongs to the country. The Casey gives his token of appreciation to the foster parents for their contribution by being handsomely paid, and under assumed names in Amsterdam.

Meanwhile in Chicago, Kyle Richmond has inherited his family fortune but is left a reminder of how he became rich as he now taken the vigilante identity as Nighthawk.

Mark is debrief by Casey about the Atlanta Blur. He and many agencies in the government had been trying to identify the Blur without any success, and shrugs this off as an urban legend. He presents Mark the only captured picture of the Blur, but can only been carefully seen by Mark to know that the Blur is real. As Mark begins to leave to Atlanta investigate the Blur, his foster parents prepares to leave for Amsterdam.

Hyperion arrives over Atlanta and hovers there throughout the entire day to hear the Blur. By nightfall, he finally hears him and chases after him. Hyperion reaches up to Blur and telling him he just wants to talk; however, the Blur outruns and escape Hyperion, leaving him to realize that he is not alone. American soldiers arrives to him and informs of his parent in a apparent boating accident. Hyperion quickly flies into the lake where his parents are suppose to be fishing. He uses his flash-vision to scan the lake, finding the wrecked boat, but also killing every fish in the lake in the process from using his power. Meanwhile, Mark's foster parents are in Amsterdam and go their separate ways.

Mark is then seen in a state of distraught.

Retrieved from "https://heykidscomics.fandom.com/wiki/Supreme_Power_Vol_1_4?oldid=1455081"
Community content is available under CC-BY-SA unless otherwise noted.