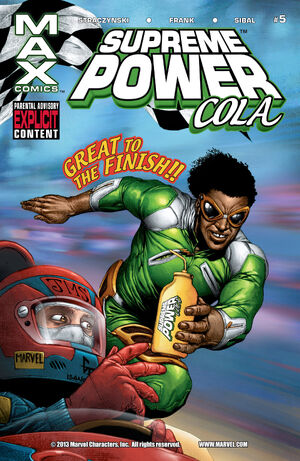 Like I said earlier, I just want to do good by people. That's all that matters. Because when you're one of the good guys, everybody likes you, right? Right?

Appearing in "Crank Up the Volume"Edit

Synopsis for "Crank Up the Volume"Edit

The government relocate Mark Milton to a penthouse in the city as his new home following the "death" of his parents. However, Mark is not all content with the generosity provided by the government given that he feels a prisoner from society.

Meanwhile, the caretakers of Project Hyperion plans to re-awake Joseph Ledger from his coma by exposing him to Mark's spaceship with intentions of not just having another superpowered agent, but also a deterrent against Mark. As previous attempts to remove the prism Joseph's hand cost the lives some people who touches the prism, as seen when one of the orderlies accompanying Joseph's transfer curiously touches the prism and is petrified. Dr. Bill Steadman examines Joseph and finds that the prism is genetically bonding to him. Steadman and his staff then plans in stimulating electric currents into the prism while in the presence of Mark's ship, which is kept behind five inches of lead shielding as a safety measure due to the various risks involved unless and until it becomes necessary. The experiment lasts for a long length of time without any signs of reactions coming from Joseph in which an impatient General Casey orders Dr. Steadman in retracting the ship's shielding. As this is done, the ship emits a powerful blind white light that fills the entire facility and awakening Joseph who immediately flies out.

In Georgia, Abigail Stewart is visit by booking agents Bill Gareth and Tom Henderson who knows her son Stanley as the Atlanta Blur and wants to offer him a job as a spokesman for major businesses and corporations. Initially Stanley is warily of the agents and their offer, but eventually comes to accept it. He makes his public appearance on television and catching the attentions of the government and Mark.

Retrieved from "https://heykidscomics.fandom.com/wiki/Supreme_Power_Vol_1_5?oldid=1455082"
Community content is available under CC-BY-SA unless otherwise noted.