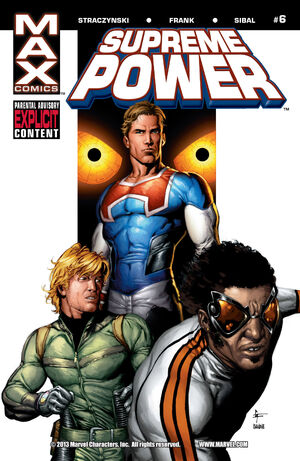 You ever see one of those English Border Collies? Fast, strong, and smarter than any other dog on the planet. But you got to keep them busy, you got to give'em homework and projects and goals. I knew a guy had one, didn't keep its mind occupied, and over the summer it took apart his front porch with its bare teeth, board by board. You don't give a dog like that something important to do, a problem to solve, it goes crazy. And the last thing the world needs is somebody like you going crazy, you know what I'm saying?

Appearing in "Questions of Perspective"Edit

Synopsis for "Questions of Perspective"Edit

Stanley Stewart, The Blur, makes a public announcement and as well being equipped with a new racing suit designed by corporate sponsors to maintain his speed (as his clothes are always shredded from the brunt of using his powers). As Stanley makes his speech, Hyperion appears before him at superspeed, asking Stanley to meet him at a horse range where they can talk.

A hour later, Stanley personally meets an awaiting Hyperion. The two begins a discussion following their first meeting which Stanley gives his reasons that he wasn't ready to be go out in public yet, and how they learned of their emerging powers; in which during a flashback, Hyperion first manifested his power of flight and able to fly into space and seeing the Earth. Stanley then raise the question of what Hyperion's goal in his life aside from being a hero. Something which Hyperion has a moment to think about. He then ask Stanley of how he obtains his powers, in which Stanley can only tell that it is still a mystery to him. Hyperion also shares about his origins according to what the government had told him, but seems to doubt this as he began to have strange dreams concerning to his actual origins. Hyperion shrugged this off and is relieve to know that he isn't the only person to have powers. Both Hyperion and Stanley departs on amicable terms before the latter informs the former about another superhero in Chicago he heard about: Nighthawk.

Meanwhile, Dr. Bill Steadman is shown by Dr. Helen Fraser about Hyperion's ship she scanned regarding to Joe Ledger, she finds miniature emptied compartments on the ship, which remained deliberately hidden from the staff, and believed that the contents may have escaped the ship through these tiny vents upon entry into the planet's atmosphere. Given the size of the vents, the contents may be some kind of bacterium or virus, or something beyond the scientists could tell. Concerned, Steadman order to have the ship contained and have its compartments examined for any residual traces. Steadman then wonders if whoever sent the ship wanted the people who found Hyperion to be totally distracted from what the ship had actually brought to Earth.

Dr. Steadman returns to his home at night and is awaken from his sleep by Joe Ledger who is surrounded in glowing aura, demanding him what he had done to him. Joe forcefully takes Steadman and flies him into the air. He menacingly tells Steadman that ever since he awoke, he had been hearing and learning from every broadcast, phone call, and word spoken and prepares to take his anger on Steadman. But suddenly, Joe changes his personality and doesn't remember what he is saying to Steadman and could only remember of waking up. Steadman, shaken, then request Joe to take them back to the testing ground.

In Chicago, Nighthawk sees a group of vandals planning to desecrate a black church and is met by Hyperion. He introduces to Nighthawk and have been observing him throughout the day and notice that his vigilantism is focus on protecting the black minorities in the city rather than stopping the crimes committing on non-black people; all of which being taken care by Hyperion. Concerned, Hyperion lectures that he deduce the reasons of Nighthawk's vigilantism and understand his well intentions, but needs to broaden his horizon and not letting his own prejudices get in his way. However, Nighthawk is not receptive of what he is told. Hyperion then left Nighthawk as he leaps into action in violently stopping the vandals.

Joe is brought to be medically examine where he recounts that he had been in space for days but couldn't remember anything aside from hearing a strange music. Dr. Steadman left Joe to take some rest and visit by Dr. Fraser, who informs Steadman that they were able to extract dozen of bacteria from Hyperion's ship. Steadman also shares his concerns to her about his encounter with Joe as he was in a differently personality in which it left him wondering if he was talking to Joe or actually the ship itself that is controlling him.

Retrieved from "https://heykidscomics.fandom.com/wiki/Supreme_Power_Vol_1_6?oldid=1455084"
Community content is available under CC-BY-SA unless otherwise noted.