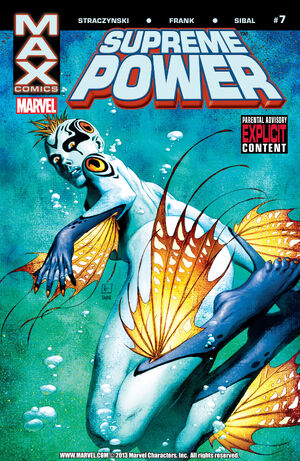 I've dedicated myself to helping people, helping the world--

Appearing in "Powers and Principalities"Edit

Synopsis for "Powers and Principalities"Edit

Hyperion comes to the rescue of a building on fire, which he saves everyone inside the inferno. The entire rescue is caught on live television and is watch by the handlers of Project Hyperion. Special Agent Bryce of the NSA, who is newly assigned to the Project, is agitated in seeing Hyperion's powers being use for heroics rather than being originally being assigned as a government operative that could further the U.S.'s agenda, and bringing his argument to General Casey. General Casey reasons with Bryce that ever since Hyperion had been made public they couldn't have him being sent on covert operations that could raise obvious suspicions tying to Hyperion, and in fact have been using Hyperion as a front for the public eye while another operative, Joesph Ledger, have been secretly filling Hyperion's original operations. Although, Agent Bryce is still not content to seeing Hyperion's abilities being wasted on heroics and which is why the NSA have gain the rights in overseeing the Project for allowing military intelligence to bringing Hyperion to the public. Meanwhile Hyperion is approach by a man who thanks him for what he had done and discretely gives him a piece of paper containing coordinates to "what [he is] looking for."

Somewhere in the ocean, the baby who was disowned into the ocean had survive and grows up as a feral child. She comes across a female diver who panics when confronted with her inhuman appearance. The diver's air hose breaks, causing her to suffocate in front of the fish-like woman. She then takes the diver to the surface, returning it to a nearby boat where the diver's husband is waiting. He also panics, assuming she had killed his wife, and attacks her with a spear gun. She retaliates, killing him.

Meanwhile, Hyperion turns up at a park in China as he followed on the coordinates on the piece of paper where he meets a Chinese government official playing chess by himself. The man enigmatically tells Hyperion that there is someone who is like him (Joseph) and is involved in unexplained political situations, and questioning him if he were a pawn to his handlers. Hyperion returns to the state where he is chastise by Agent Bryce for being in China and the foreign implications involved before being intimidatingly silence by Hyperion of what could stop him. Bryce then unnervingly left, allowing Hyperion to find the other superman after listening to a radio political talk show in finding him where he would be. He traces him to Africa and chases after him at supersonic speed before being blasted to the ground, which he is then confronted by Joe Ledger who warns him that it is a mistake for finding him.

Retrieved from "https://heykidscomics.fandom.com/wiki/Supreme_Power_Vol_1_7?oldid=1455085"
Community content is available under CC-BY-SA unless otherwise noted.