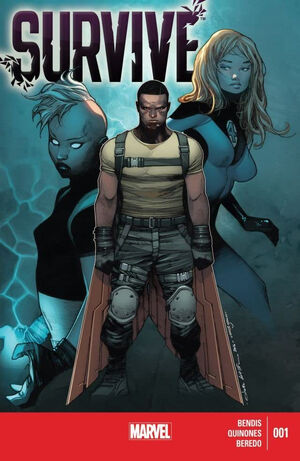 Washington D.C. The funeral for Captain America. Only the heroes that knew him personally are there, including Spider-Man, Spider-Woman, Kitty Pryde, Jean Grey, Rogue, Jimmy Hudson, Nick Fury, Monica Chang, Susan Storm and others. Tony Stark gives an eulogy at the funeral, saying that he inspired people merely by walking, and that was the best quality about him. He nearly chokes up, even though he makes a small joke.

Earlier, Monica Chang came upon the wreckage after Galactus was defeated, and asked her attorney, Foggy Nelson, how bad her situation was. Foggy said that they might press charges against her since she was the head of S.H.I.E.L.D. when everything went to pieces, though he says that everyone knew something like this would surely happen. Monica gets angry, saying the thing came without warning, so she shouldn't be charged. Foggy then says that S.H.I.E.L.D. itself may be dismantled. Again she gets angry, and asks to go to court instead, but Foggy says that she is now responsible for the death of Cap and Thor's disappearance, as well as for allowing Reed Richards onto the HeliCarrier. He gives her his card and says to give him a call. Chang then starts crying.

Back at the funeral, Tony Stark asks for another miracle, and that Steve would just walk up to them and give them orders - but he won't. He then says that he MAY come back when we need him most (like King Arthur), possibly in the year 3020.

Three days earlier, Reed Richards up into the remains of the Baxter Building. He has a flashback to when he first met the Storm family, when Sue Storm herself appears, having been sent away from New Jersey cleanup. She demands to know why he was trying to kill everyone one moment and save everyone the next. Reed, however, does not know himself. Sue distrustfully creates a force field and demands to know what happened on Earth-616. Reed tells her - again - that he saw who he could have been thanks to Valeria Richards, and that he wants to become like his mainstream counterpart (he also hacked their files in order to solve the crisis at hand). Sue states that they are not getting back together due to his alien invasion as the Maker, and asks why he is here. He says he wanted to see what survived of the Baxter Building and the work of Dr. Storm.

Again at the funeral, Stark says that he does not know how Cap will come back or what to do now, but he knows something - without Cap and Thor, there is no more Ultimates. They are disassembling.

Meanwhile, government officials arrive at the Pryde residence and ring the doorbell. Mrs. Pryde tells them to leave, thinking they are reporters, but opens the door after discovering who they are. The officials say they are hear to give a phone call to Kitty, who has just returned home after being gone for so long at the school. The call happens to be from the President, who wants to give her the Medal of Freedom for her efforts. He also says that he also has been fighting for mutantkind since he was elected, and that her actions solidified that hatred against mutants is now extinct.

Stark starts to wrap up the eulogy, saying that he lives on in every hero ever created and born, but the world is far from fixed. Crime goes up after such a disaster. Crime that the heroes of the world can stop.

The last bit of S.H.I.E.L.D. starts to clean up the wreckage with some construction workers. A piece of rubble nearly collapses on them, but Spider-Man saves them. As they thank him, Spider-Woman suddenly comes up and asks what he is doing; he merely says he wanted to help cleanup, even if it will take years to do so. Jessica says she wants him for something.

Finally, at the funeral, Jessica interrupts Stark to make an announcement regarding the next generation stepping up. The Power Pack has been discussing among themselves, and they have come to a decision. THEY will be the next Ultimates, THE YOUNG ULTIMATES (much to Stark's confusion).

Retrieved from "https://heykidscomics.fandom.com/wiki/Survive!_Vol_1_1?oldid=1463155"
Community content is available under CC-BY-SA unless otherwise noted.