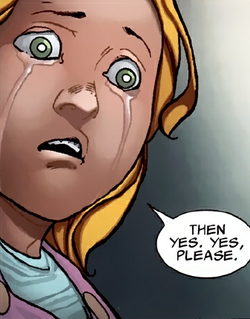 Following the Fortress X time, where Legion's personas all had a body for themselves, the return to "normal" reality left free six of those sub-personalities outside David's body.[1]

He and the X-Men became aware of the six only after he tries to use Time-Sink's powers, and is unsuccessful. His Delphic divination powers reveal the rebellion of six personalities:Time-Sink, Chain, Susan in Sunshine, Bleeding Image, Styx and Endgame.[1]

The personalities all traveled to Europe and separate, with Chain and Susan going to London.[2] The X-Men Frenzy and Gambit confronted Susan. When Frenzy tore apart her doll, she stopped battling due to her sadness, and then happily accepted a merge back into David.[3]

When walking through David's mind searching for Rogue in there, Charles Xavier saw Susan, seemingly playing peaceful in her cell with a new or fixed doll.[4]