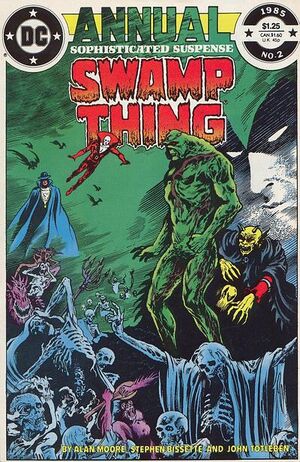 Y'know, being dead, it's like waiting for a bus... you don't see anyone for months and then two or three arrive together...

Appearing in "Down Amongst The Dead Men"Edit

Synopsis for "Down Amongst The Dead Men"Edit

Following the death of Anton Arcane, Swamp Thing is left with the living but soulless body of his friend Abby Cable. Knowing that her soul has been condemned to hell, he swears that he would follow her if he could. Suddenly, he realizes that he may be able to do just that, by casting his consciousness into The Green.
He traverses The Green, and finds himself tempted to simply let himself be lost within it. Fortunately, he regains his drive, and moves beyond The Green, and beyond life itself, into a new plane. He finds himself in a strange place, which seems to be empty and constantly changing. A woman appears, wondering where she is, and looking for her son. Before he can say anything, the boy appears, and leads his mother into a bright light, leaving Swamp Thing alone.
Moments later, a voice catches his attention. It is the voice of Boston Brand, also known as Deadman. He explains that Swamp Thing has found his way to the Region of the Just Dead, a place where those who have just died end up before passing on. Swamp Thing inquires after Abby's soul, and Deadman admits that having died the day before, it is likely she has already passed on into the lights.
Deadman can go no further, but they are suddenly startled by the appearance of the Phantom Stranger. The Stranger leads Swamp Thing through the light to a green place that seems like paradise. He explains that it is an aspect of Heaven, one of an infinite number. This aspect belongs, as it turns out, to Alec Holland. Alec thanks Swamp Thing for finally burying his body, and allowing him to pass on to Heaven. He lives there with his wife Linda, and they are discussing reincarnation. Alec invites Swamp Thing to meet Linda, but he declines.
Having explored the two nicer options, the Stranger and Swamp Thing are left with no choice by to go to Hell, and seek out Abby. Before they can gain entry, however, they must ask permission from The Spectre. The Spectre refuses permission, claiming that Abby's consignment to Hell is by the decree of God. The Phantom stranger argues that if she was unjustly condemned, then Hell has no reason. Contrarily, the Spectre responds that being able to return from death would similarly render life meaningless. The Stranger shrewdly asks what that means for Jim Corrigan - the man whose body the Spectre currently inhabits. Bested, the Spectre lets them pass.
At the gates of Hell, the Phantom Stranger states that he cannot enter with Swamp Thing. Fortunately, Etrigan appears, and offers his help since the Swamp Thing helped him defeat the Monkey King. However, he requires a fee: a flower that the Phantom Stranger plucked from the western slope of Heaven. The payment made, Etrigan leads Swamp Thing into hell.
As they wander through hell, they encounter some demons who are using General Sunderland as a slave. When he recognizes Swamp Thing as the one who killed him, the demons rip out his tongue to keep him quiet. Realizing that these demons will be of no help to them, Etrigan leads Swamp Thing deeper.

Next, they encounter Anton Arcane, condemned to have the eggs of insects hatching inside of him for eternity. He mocks Swamp Thing's attempt to retrieve Abby, warning that he won't want her once he sees her. Before Swamp Thing leaves, Arcane demands to know how many years he has been in hell. When Swamp Thing responds that it has only been one day, Arcane screams in horror.
Finally, Swamp Thing and Etrigan discover Abby's soul being tormented by a group of demons. Angrily, he attacks them, pushing them aside. The demons become angry, and Swamp Thing is forced to grab Abby and run. Desperately, Etrigan tries to open an escape route out of Hell, while they evade the demons' attacks. However, Arcane bites into Swamp Thing's ankle, gripping with his jaws. He complains that without Abby's soul still in hell, his revenge is moot, and he suffers without any satisfaction. With time running out, Etrigan loosens Arcane's grip with a kick and sends Abby and Swamp Thing through the exit.
Back in the swamp, Abby awakens with no memory of what happened to her. She is puzzled to see that Swamp Thing is crying.

Retrieved from "https://heykidscomics.fandom.com/wiki/Swamp_Thing_Annual_Vol_2_2?oldid=1506375"
Community content is available under CC-BY-SA unless otherwise noted.