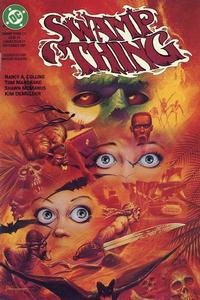 While going blackberry picking in the Louisiana swamp, the Swamp Thing and his wife Abby lose track of their daughter Tefé. After a brief search, they discover their daughter has happened upon a Zydeco player, and is dancing for him.
The old man seems to have a curious knowledge of the Swamp Thing and Tefé's elemental natures, and admits to have known the previous elemental, Alex Olsen. He explains that the Swamp Thing is not the only strange things in the swamps, recalling rumours of Loup Garoux. He tells the story of the Letiche, spirits of unbaptized babies who steal the breath of living children.
Another legend tells of a Cajun man with 25 children, who was very poor. One day, the man came home to the smell of cooking meat, and ate it happily, wondering where it came from. Eventually, he noticed that some of his children were missing, and his wife claimed that they were away with her sister. One day, he heard singing voices claiming that his wife had killed the children, and he had been eating them. He followed the voices until he found their bones under the porch. He then murdered his wife, and laid the bones of his children to rest.
Having seen a vision of a ghostly pirate ship out on the bayou, Swamp Thing asks if the man knows any legends about them. The old man obliges, telling the tale of Jean LaFitte and Dark Conrad. Dark Conrad was something of a warlock, and one day he raided a Caribbean village and killed LaFitte's woman there. Lafitte swore vengeance, and so Dark Conrad sailed his ship to the black bayou and never came out, leaving LaFitte to wait until the day Conrad would return.
Another legend was that of the devil, who lived in New Orleans and took a Creole mistress. He bought her a fine house, but he was away often. As such, his woman took up with another man. So, the devil confronted his rival and, instead of being angry, convinced the man to ask the girl to marry him - just as long as she took the last name "L" for Lucifer. Hearing the plan, the woman strangled her lover to death. The devil appeared there, and killed her, eating both bodies and throwing their skins to the winds.
The old man then offers a story which he claims is truer and sadder than most. A young man named Augustine Dupin worked as a cotton-picker until the day he saved enough money to buy an accordion. He became so good at playing Zydeco music that he pulled himself out of poverty. One night, a girl asked him to play a song about her troubles. Unfortunately, the girl's boyfriend was sitting in the audience, and destroyed the accordion.
Later, Augustine met with a fine fiddler, Jean Theriot. They teamed up to make recordings, and became very popular and wealthy. One evening, they had a show at a rich landowner's daughter's debut party. Augustine got sweaty, and asked for a rag to wipe it. The daughter offered her own handkerchief, but since he was a black man, her family became angry.
The men at the party attacked Augustine outside, beat him, broke his accordion, and then ran over his trachea with a car, killing him. After a while of waiting, Jean and the band thought they'd have to start without Augustine, but suddenly he appeared with a new, outlandish accordion. The music it played was so beautiful that it caused the men who attacked him to catch fire. It wasn't until the band ran to escape the fire that they found Augustine's corpse outside.
Swamp Thing and his family decide they've taken up too much of the old man's time, and head for home, promising to share the old man's stories. He allows them to call him by the name 'Ya-Ya.' Hanging back, Swamp Thing hears a voice calling to him, and turns to find an apparition of Augustine Dupin. The ghost warns him that there is a storm brewing - a storm much worse than a hurricane. He hands the Swamp Thing a dubloon from LaFitte's treasure, and claims that it will call its owner at the right time. The ghost tells the Swamp Thing to take care of his family before disappearing.
All that remains in the ghost's stead is an old photo labelled "Augustine 'Ya-Ya' Dupin: The Father of Cahun Zydeco Music (1901-1931)."

Retrieved from "https://heykidscomics.fandom.com/wiki/Swamp_Thing_Vol_2_111?oldid=1461448"
Community content is available under CC-BY-SA unless otherwise noted.