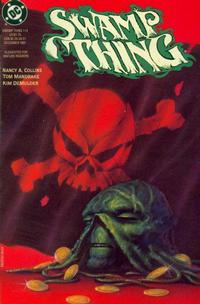 It's comin' all right. And it'll be bloody hard t'miss when it gets here. What with it flyin' the Jolly Roger!

Something is invading the swamps of Louisiana, terrorizing and killing its Cajun residents. Meanwhile, in London, John Constantine wakes from a restless sleep with the image of a Jolly Roger fresh in his mind.
In her swamp home, Abby Holland receives a visit from her Cajun friend Gene LaBostrie. He brings her a pendant made from an authentic doubloon which her husband was given by a spirit some weeks ago. The metal worker who fashioned the pendant is curious to know whether there are any more of those doubloons, but Swamp Thing states that it is unique.
Elsewhere in the swamp, Ethan Broussard attends dinner with his family after having been reading from Treasure Island. His father is disgusted by the idea of his son reading books and attending school, having been recruited into working for oil companies and fisheries out of the fourth grade. Their argument comes to a head, but it is interrupted by the voice of a horrifying man: the dead pirate Dark Conrad. He and his men kill the older men, and capture the women and children of the Broussard family.
At their swamp home, Abby and Swamp Thing have their comfortable lives invaded by the appearance of John Constantine on their front stoop. After some prodding, Constantine explains that there is a storm coming. Swamp Thing recalls that he had been warned once before of a coming storm. As if in response, he and Constantine are surprised by the appearance of Augustine "Ya-Ya" Dupin, the ghost who had warned Swamp Thing earlier. Dupin claims to be a representative of the spirit of the swamp, and demands to know where the doubloon has gone. They realize too late that Abby is in danger.
Swamp Thing arrives in time to see the pirate gang capturing his wife and daughter, dragging them onto a boat. Constantine catches up, as the boat makes its escape. When Swamp Thing reveals that the captain of the pirates is Dark Conrad, Constantine is well aware of the pirate's history.
Dark Conrad was once a minor noble - a baronet - who had an unwholesome interest in the black arts. He used to hold ritual orgies at his country estate until some scandal regarding the murder of a young man as a sacrifice stripped him of his titles. He became a pirate, and used that freedom to continue his demonic rituals. He allied himself with demon gods known as the Old Ones, making bloody sacrifices to them often. Eventually, he had his rival Jean LaFitte's wife murdered and raped, setting LaFitte on an endless quest for vengeance. Constantine admits that Dark Conrad is actually one of his ancestors.
The pirates drag Abby and Tefé to a tall phantom castle deep in the swamps, as Dark Conrad explains that the Old Ones walked the earth long before The Green existed. He throws Abby in among a crowd of captured Cajuns including Gene LaBostrie, and gleefully announces that they are all on their way to Hell.

Retrieved from "https://heykidscomics.fandom.com/wiki/Swamp_Thing_Vol_2_114?oldid=1461454"
Community content is available under CC-BY-SA unless otherwise noted.