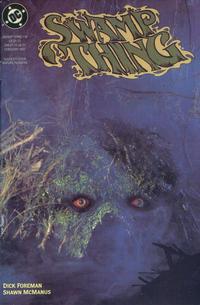 Appearing in "The Growing Season"Edit

Synopsis for "The Growing Season"Edit

One day, a boy named Casey Quigley discovers one of the discarded husks of the Swamp Thing's body. Inside it, he finds a tuber, and decides to plant it.
Casey's mother Lena is prone to drinking, having been run ragged by abuse and stress from Casey's father Dan. Consequently, she is not particularly aware of her son's needs, and allows him to wander the swamps, checking on the growth of the tuber he planted. Each time he visits the plant, it has grown further into a strange shape with humanoid features.
Casey's best friend is Irving, who often shares his mother's delicious sandwiches with his friend. They hang out in a rusted out car, wrapped around a tree near where the tuber grows larger. Casey confides that his father scares him, and that he'd like for he and his mother to be able to live somewhere else alone.
Lena shares similar dreams, thinking that as soon as there's enough money, she and Casey will move to Missouri, and never have to deal with her husband again. Meanwhile, Casey's plant has grown to a towering height. He calls it the Tree of Limbs, and has begun to think of its affect on him as fatherly.
One rainy night, Lena worries that they can't afford to leave yet. Not long after, a knock comes at the door, and they are crestfallen to see Dan Quigley standing there. He claims that he's changed, having found religion. Lena seems to fall for it, and it seems like he's come home for good. Though his father is behaving better, his new belief system bothers Casey, and there's something about him that the boy doesn't trust.
Dan Quigley's apparently devout belief paired with his naturally controlling nature become more intense as time goes on, and Casey catches him sneaking alcohol when Lena isn't looking. His father forbids him from going to the swamps to check on his plant friend, and drags him to church instead.
One day, Lena comes home early from grocery shopping, and discovers Dan drinking wine. She believed that he had given up drinking, but it is clear that he has not. Angry that he has been questioned, Dan undoes his belt, and prepares to beat her with it. Casey stands in his way and shouts that he knows his father hasn't changed, and that there is something evil within him.
Dan turns his attention to Casey, and the boy runs out the door toward the swamp. Dan gives chase, and is disturbed by the sight of the strange plant growth that Casey runs into. Casey travels through the Tree of Limbs, noting all of its useless humanoid organs on the way. Dan follows, but in the process, he falls into a pool of bubbling yellow liquid and drowns. Casey escapes, but he notices that his Tree of Limbs has become infested with a grey fungus, and will die soon.
Eventually, Casey and his mother move to Missouri, and the Tree of Limbs crumbles to dust.

None of the Swamp Thing cast actually appear in this issue.

Retrieved from "https://heykidscomics.fandom.com/wiki/Swamp_Thing_Vol_2_116?oldid=1461458"
Community content is available under CC-BY-SA unless otherwise noted.