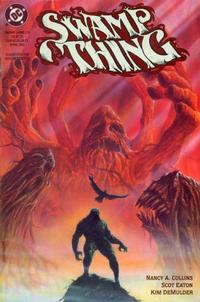 He is still... The Green's sole champion. For him to focus too much time... and attention... on his successor could prove dangerous for both him and The Green...

Appearing in "A Child's Garden"Edit

Synopsis for "A Child's Garden"Edit

Late one night, Tefé Holland wakes to the sound of a voice calling to her to come outside and play. She crawls out of bed, sneaks past her parents, and heads outside. Waiting to greet her in a grove outside are a number of fairy tale characters hoping to play. There, Peter Pan explains that their new adventure will be to go to the land of the Gobble-You-Ups in order to rescue Princess Pritty-Pritty from the evil king Thundermugg.
Despite the threat from Thundermugg, there is one danger worse: the Bad Man. The Bad Man finds children, pretends to be their friends, and then takes them away to eat them all up. Suddenly, Tefé's friends all begin to run away, screaming that the Bad Man is on his way. Instead of a man, a raven alights on top of a nearby tree, and explains that he has not been a bad man for sometime. He asks her for her name, and when he realizes whose daughter she is, he welcomes her to the Dreaming, a part of her human heritage. As it turns out, the raven is Matthew the Raven, once Matt Cable, and Tefé's mother's former husband.
The next morning, Abby Holland finds her daughter's behaviour aggravating, as Tefé refuses to eat. Her father, the Swamp Thing, decides that she should just play outside a while until she's actually hungry. As he sets her down outside, Abby calls him away, and he asks her to promise to stay put while he's gone.
After Swamp Thing has gone, Tefé finds herself face to face with Les Perdu, a monster comprised of the tortured souls of several people drowned in the bayou. At first, it debates whether or not to kill her, but eventually decides against it. Tefé forms a connection with one of the spirits, a young boy named Tommy who was kidnapped by someone, and when he tried to escape the man drowned him in the bayou. The creature disappears in time to go unnoticed by Abby as she picks up her daughter, and returns home.
Abby encourages Tefé to play with their kitten, but when the girl tugs on the cat's tail, it scratches her cheek. Hurt and angry, Tefé impulsively causes its body to unravel and turn inside out. The girl's parents are horrified at what she has done, particularly since the mangled animal is still alive. Sadly, Swamp Thing snaps the kitten's neck and absorbs its corpse into his body. Desperately, Abby wonders what she can do to teach Tefé to control her powers. Reluctantly, Swamp Thing decides that he must consult with the Parliament of Trees.
At the Parliament, Swamp Thing finds that despite intending to reach the Inner Parliament to speak with Yggdrasil, but instead he has emerged in the Outer Parliament. The trees explain that while Yggdrasil attempts to reconcile himself as the dual emissary of The Green and The Grey, none are permitted into the Inner Parliament - not even Swamp Thing. Resigned, Swamp Thing pleads his case to the trees, and departs. Considering his plight, the trees make a call for volunteers to go to Louisiana and train Tefé. A female tree speaks up, and the Parliament thinks she will be a fine choice. When Swamp Thing returns home, he finds that Abby has taken Tefé grocery shopping in town.
In the grocery store, Abby and Tefé run into their friend Carl Vinter and his boyfriend Troy. While Abby is being properly introduced, somebody offers Tefé a candy, and takes her away. Abby turns to see her daughter gone, moments too late.
In the swamp, Les Perdu remembers how Tommy was kidnapped and murdered. Suddenly, it catches his kidnapper's scent somewhere in the swamp, and begins hunting it down. Meanwhile, Abby returns home with the police and announces to her husband that their daughter has been kidnapped.

Retrieved from "https://heykidscomics.fandom.com/wiki/Swamp_Thing_Vol_2_118?oldid=1676476"
Community content is available under CC-BY-SA unless otherwise noted.