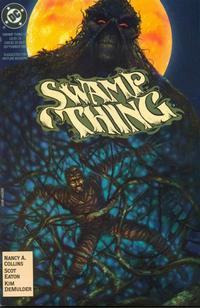 If it were anyone else besides Sunderland... I know the old bastard is dead... and rotting in Hell... but I cannot help but feel... his twisted hand... in this...

Late at night, Abigail Holland is awakened by a loud noise from downstairs. She and her husband, the Swamp Thing, decide to investigate together. It turns out to be Otter, one of the young activists they had met recently, claiming to be in great danger.
Otter explains that after he had hacked into the Sunderland Corporation's mainframe, he had discovered Prof. Clark Johnson, his mentor, murdered. The police believe it to have been a routine burglary gone wrong, but Otter is certain that the professor was killed to get at him. Abby encourages him to try to sleep for the time being, and work out what happened in the morning.
The next day, Abby heads into Houma to use her friend Chester Williams' phone. On her way into the house, she runs into her friends Carl and Troy, who seem to be moving out. This is surprising, considering that Troy had only just moved in. The gay couple explain that they are leaving because the night prior, the Ku Klux Klan had burned a cross on the lawn. Chester doesn't blame them for leaving, but he has been unsettled by the bigotry in his town, knowing the police will be of little help.
While Abby uses the phone to contact Michelle, another of Otter's activist friends, Chester's neighbour, Lester Boudreaux brags to gubernatorial candidate Ben Barron about what he perceives as perversion and obscenity going on in that house. He points out that Abby is married to the Swamp Thing, and condemns her choice of attire as scandalous. Representative Barron promises that he will do something about this reprehensible behaviour.
Back in the Louisiana swamp, Swamp Thing attempts to find out what Otter learned from the Sunderland Corporation's mainframes. All Otter could find was limited information on something called Project Proteus.
Having been contacted by Abby, Michelle and her friend Spike drive in to Houma from New Orleans, hoping that Chester can help lead them to the Swamp Thing and Otter. Meanwhile, Chester has become so frustrated with the way things are going in town that he decides to equip himself with a shotgun for protection.
Stepping out of their car, Michelle is surprised when Spike suddenly collapses. When she runs to him, she discovers that he his bleeding heavily, and has been murdered. Looking up, she sees a man in the shadows holding some kind of thin blade, which sparkles in the night. Desperately, she runs and bangs on Chester's door. When he opens it in frustration, she wraps her arms around him, screaming that Spike is dead. When she tells him what happened, they decide to go check to make sure Spike isn't still alive. Strangely, his body has disappeared.
Chester decides that he will lead Michelle to the Swamp Thing, as he is the only being that he knows who can help them out. In doing so, they risk leading the killer straight to Otter, but they have no other choice. Trudging deeper into the swamp, the killer suddenly leaps out at Chester. The resultant commotion causes Chester's shotgun to go off, alerting the Swamp Thing.
Fortunately, Chester has survived, and is in a physical struggle for his life against Dr. Eric Neiderman, the Needleman. Neiderman is surprised when he finds his limbs being restrained by vines shooting up from the ground. They yank him back, away from Chester. Angrily, the Swamp Thing demands to know why Neiderman has done these things. The crazed doctor refuses to betray the General's name by talking to the enemy. Swamp Thing announces that General Sundeland is dead, having killed the man himself. Neiderman callously remarks that the young college students were only marked for death because they were friends of the Swamp Thing. With that, Neiderman stabs Swamp Thing through the eye with his long needle.
Of course, the Swamp Thing survives, and declares that he will be turning Neiderman over to Officer Rawls. Stubbornly refusing to cooperate, Neiderman chomps down on a poisoned capsule hidden in his tooth, and then dies.
Afterwards, Otter and Michelle decide to go live under the radar in Colorado. As they leave, Chester announces that he is considering going back to school and becoming a teacher; doing something that actually helps beyond joining environmentalist groups. Meanwhile, Abby and Swamp Thing wonder if the Sunderland Corporation will leave them alone.
At Sunderland Headquarters, Constance Sunderland receives a report on the recent events, but thinks little of Neiderman's death. As it happens, she has several more sleeper agents waiting for her command.

Retrieved from "https://heykidscomics.fandom.com/wiki/Swamp_Thing_Vol_2_123?oldid=1461472"
Community content is available under CC-BY-SA unless otherwise noted.