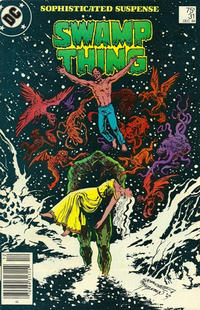 You have made a mistake Arcane. Things have changed since you were dead. I am not Holland. I am Swamp Thing. I am of the clean Earth I am in my place of power. And you should not have COME here!

Appearing in "The Brimstone Ballet"Edit

Synopsis for "The Brimstone Ballet"Edit

Possessing the body of Matthew Cable, Anton Arcane reveals to Swamp Thing that he has not only killed his friend Abby Cable, but he has also sent her guiltless soul to Hell. He chases Swamp Thing with a plague of abominations, but he is lured back to the swamp by his prey.

From outer space, the events in Louisiana are being observed by Harbinger and The Monitor. Despite Harbinger's concern about the dramatic levels of supernatural activity going on there, The Monitor refuses to intervene. He is, however, unable to tear his eyes away from his viewer.

Arcane believes that his power gives him control over the swamps, but it is there that Swamp Thing reveals to his foe the new power he has gained from communion with the world of flora. Arcane is taken aback, unaware of the fact that Alec Holland and the Swamp Thing were never one and the same. Swamp Things' elemental power is able to hurt Arcane, and weaken his hold over his host's body to the point that he is forced into an internal struggle with Matthew Cable's consciousness.

Matt wrests some of Arcane's control away, and decides that after what happened to Abby, he would give up the extension that his life was given in order to send Arcane to Hell. Arcane's soul is condemned to Hell, leaving only Matthew's battered and broken body - the wounds from his car accident returned to him. He admits to Swamp Thing that it was his own weakness that allowed Arcane to kill Abby.

Swamp Thing suggests that Matthew could use his reality-warping powers to heal himself. Matthew doesn't want to live, however, and instead, decides to help bring Abby back to life. Though he is weary, Matthew is able to regenerate his wife's cells, making her blood flow, her heart beat, and her lungs breathe, but he fails to return her soul before dying. Swamp Thing then gathers Abby into his arms and walks further into the swamp, leaving Matthew's body to be found by police.

Retrieved from "https://heykidscomics.fandom.com/wiki/Swamp_Thing_Vol_2_31?oldid=1461289"
Community content is available under CC-BY-SA unless otherwise noted.