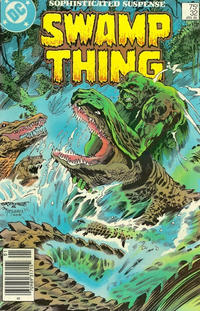 A group of aliens come to earth in a sentient spaceship shaped like a turtle. They disembark in the swamps of Louisiana, hoping that this will be a world compatible enough for them to settle on. They encounter the Swamp Thing there, and despite his compatriots' protests, one of the aliens shoots him down.

An alien named Pog grows to realize that Swamp Thing is not a threat, and unbinds him. Though they can't understand each other's languages, they engage in communications by drawing on the ground with a stick. Pog explains the reason for his arrival at earth via pictograph. He and his crew came from a world with a planetary ring and two suns. Initially, the planet's animal kingdom lived harmoniously, but then a species of domineering creatures appeared, and captured the other animals for food and experimental purposes. This continued at a large enough scale to deplete the planet's resources, forcing the remaining animal species to put together a team to find another inhabitable world. One member of each of the other species, including Pog, was put aboard a ship to repopulate their new home.

Sadly, Swamp Thing leads Pog to Baton Rouge, where he reveals that humans are very like that domineering species that forced Pog and his friends away. Disheartened, Pog resigns himself to the fact that they will have to keep searching for a new home. Unfortunately, upon their return to the swamp a piercing scream alerts them to the fact that one of Pog's friends, Bartle, is being attacked by alligators.

Swamp Thing attempts to rescue him, but he is too late to save Bartle from death. Together, he and the aliens bury Bartle in the swamp, before they return to space in their ship.

Retrieved from "https://heykidscomics.fandom.com/wiki/Swamp_Thing_Vol_2_32?oldid=1461291"
Community content is available under CC-BY-SA unless otherwise noted.