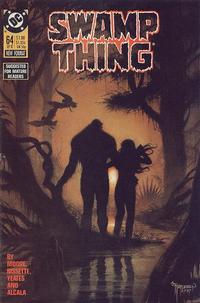 I never felt this happy, not in my whole life! I... I'm almost glad I lost you, just to get you back!

Appearing in "Return Of The Good Gumbo"Edit

Synopsis for "Return Of The Good Gumbo"Edit

Somewhere in the Louisiana swamp, Gene LaBostrie paddles a gondola across the bayou to his home. He feels as though the swamps have lost their soul, and his family is not living well as a result. He hopes that one day, it will return.

Meanwhile, Abby Holland and Swamp Thing are happy to be together again. He tells her some of his adventures in space, but hesitates when it comes to telling her of how he ended a famine on the planet Rann with his abilities. Inwardly, he wonders why he chose not to tell her, but ultimately fails to reach a conclusion. He realizes that with his powers, he could do almost anything on earth. After hearing about Abby's own ecological activism, he hints that he could do a lot to help the earth.

Swamp Thing offers Abby a tuber from his body, and she eagerly bites into it, beginning a hallucinogenic experience which facilitates their love-making. Afterwards, Abby sleeps. Swamp Thing uses the time to think further on his power. He thinks back on how the members of the Parliament of Trees have chosen to take a passive role in earth's development, going so far back as the beginning of life on earth. He realizes, eventually, that if he chose to feed the earth's starving, or grow back rain forests and barren deserts, man would simply become dependent on him to do it again as they increase their pollution, rather than changing their ways.

He makes a decision, and wakes Abby. He returns life to the swamp, and offers to let Abby live there with him forever; a place to retire, finally. She happily agrees as he brings roots up out of the waters, and builds a home for them on a small island.

Abby calls her friend Chester Williams to say goodbye, knowing that she and Swamp Thing will be withdrawing from society for some time. Chester is actually is genuinely pleased for both of them, and even offers to move in with Liz Tremayne and help to rehabilitate her. He reveals that there are already new recruits to their ecological group, and that they will be fine without Abby. The friends all part amicably, with Chester and Liz apparently sharing a romantic bond.

Elsewhere, Gene LaBostrie encounters Howard Fleck, photographer for the Houma Daily Courier. Fleck is looking for the recently returned Swamp Thing, hoping to get a photo. LaBostrie feigns an inability to speak and understand English, and simply paddles away. He is pleased, knowing that the Swamp Thing has returned and the life has returned to the swamp.

Retrieved from "https://heykidscomics.fandom.com/wiki/Swamp_Thing_Vol_2_64?oldid=1461355"
Community content is available under CC-BY-SA unless otherwise noted.