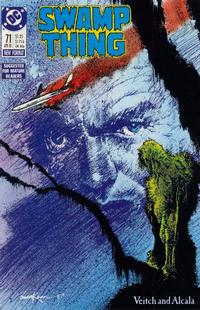 Yer a little late for the party. And what's with your friend? I thought he was the one we threw this bash for? You bollixed it up, didn't ya?

Appearing in "Fear of Flying"Edit

Synopsis for "Fear of Flying"Edit

Retrieved from "https://heykidscomics.fandom.com/wiki/Swamp_Thing_Vol_2_71?oldid=1461369"
Community content is available under CC-BY-SA unless otherwise noted.