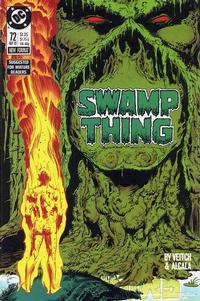 Constantine!? He knew, didn't he? That was his job... Oooh, I hate that creep! He'd sell his own baby for a cigarette!

Appearing in "Gargles in the Rat Race Choir"Edit

Synopsis for "Gargles in the Rat Race Choir"Edit

The Parliament of Trees is in a place of uncertainty. Because of the actions of the Swamp Thing, its council is out of commission, and nature is in unbalance because of his failure to prevent a second wood elemental from coexisting with him. Meanwhile, John Constantine attempts to have his friend Brenda divine the future using the entrails of a small rodent that he found on the side of the road. Unfortunately, because he found it, the only future she can divine pertains to him. Her response to what she sees is merely that he should stay in bed.
In the Louisiana swamps, a sleeping Abby Holland is surprised to be awakened by the feeling of her husband, the Swamp Thing, regrowing his plant body in between her thighs. Pleased to see him, she asks how his last attempt to merge the Sprout with a new host went. Sadly, the attempt was a failure.
Abby is disturbed to find that in the attempt to find a new host, 300 people were killed in the plane crash. When she realizes that Constantine was involved, she correctly assumes that he knew that hundreds of people would die, and did nothing. Sadly, the Swamp Thing warns her that certain human events are fated to occur. Abby complains that by that logic, all of those people would have survived if he had simply taken his place with the Parliament of Trees. Meanwhile, all of the failed attempts to merge the Sprout with a host are corrupting it.
Elsewhere, another of Constantine's acquaintances uses a computer to compile information from people's dreams, and discovers that 67% of the dreams have some mention of the Sunderland Corporation in them.
In the limousine of Roy Raymond, a man named Lipchitz reflects on how the car was commandeered by a creature like the Swamp Thing - which in reality was once the mind of madman Alan Bolland, now linked with a plant-body. Bolland has locked the doors, and is now simply driving around the country, only stopping to buy gas with Raymond and Lipchitz' credit cards. Raymond is desperately trying to contact Morgan Edge so that he can contact Superman to save them.
Elsewhere, Constantine visits his friend Ming, an acupuncturist. Ming reads him a prophecy from the I Ching, the Book of Change, which is an ancient tool for divination. The prophecy forebodes doom. Later, Constantine visits Rodney, the mathematical savant. Rodney has calculated that Constantine's chances of failure are 94%.
Swamp Thing regrets not simply following the Parliament's directive to kill the Sprout, knowing that his continued existence is the primary cause of coming doom. He considers going back to Brazil, and taking root with the Parliament. Abby attempts to reassure him, to some success. Swamp Thing decides to join Constantine, and do the job right. He sheds his plant form, and promises to be home as soon as he can.
Constantine visits a shaman, who had predicted that Abby would be related to a great danger coming. The drawing he drew then is now complete. It shows Abby breastfeeding a baby.
Somewhere, Alden Hollandaise wakes up to the sound of his infant son crying. His wife tries to pass the baby off, but he ignores her and goes for a jog. He returns home to find his wife still begging him to take the day off so that she can get some sleep. He continues to ignore her. He gets into his car onto the highway, and finds himself stuck in traffic behind Roy Raymond's limo. Alden has big plans and a big deal coming up with the Sunderland Corporation. He powers his way into the building, speeding past each of his coworkers. Eventually, he begins to realize that something is amiss. His coworkers appear to be mocking him. When he makes it to his office, he discovers that it has been filled with sacks of Rattinite fertilizer.
He had ordered only one bag for his presentation, but one hundred had come instead. Suddenly, from behind him, Alden Hollandaise hears the voice of John Constantine behind him. Constantine has been waiting for him. Constantine notes that a man named Alden Hollandaise working for Sunderland Corporation in an office unexpectedly full of dirt can be no coincident. Deluded, Alden assumes that Constantine is a corporate headhunter. <br/. Eagerly, Alden admits to the fact that Rattinite fertilizer is actually recycled nuclear waste, and it is dangerous. It was his idea, he says. As he explains his successful plan, he lights a cigarette for himself, and the flame from the lighter suddenly explodes in his hand and envelopes his body. Unsurprised, Constantine watches as Alden Hollandaise burns to death in a room full of irradiated dirt.
Swamp Thing speeds to the Sunderland building, hoping to merge the Sprout with Hollandaise, but Constantine realizes that Hollandaise is a poor choice, and drops the vegetable matter that Swamp Thing is meant to use to grow his body there with into an incinerator. Swamp Thing homes in on the mutated carrot, and heads to the sub-basement, but he finds no human souls... only the cryogenically frozen body of his once-nemesis General Sunderland.
Knowing that time is running short, the Parliament of Trees calls on a last resort - a monster from the depths - to resolve the unbalance in nature.

Retrieved from "https://heykidscomics.fandom.com/wiki/Swamp_Thing_Vol_2_72?oldid=1461371"
Community content is available under CC-BY-SA unless otherwise noted.