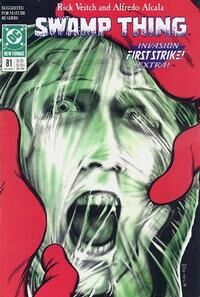 I'm not some Fay Wray who's available to every bug-eyed monster that comes along!

After a vivid sex dream, Abby Holland wakes in a tent with Chester Williams to the harsh reality that the home she built with the Swamp Thing has begun to rot and collapse in his absence. They do not understand the significance of this, but they both fear that it may mean that the Swamp Thing is dead.
Abby and Chester creep inside the dried out husk of the tree house, when Chester suddenly hears a noise upstairs. They investigate, but find nothing. Convinced that the Swamp Thing isn't there, Abby turns to collect some things and go. Suddenly, an alien intruder slaps some cuffs around Abby's wrists and puts a bag over her head.
Elsewhere, at Terrebonne Parish General Hospital a doctor removes the bandages from the newly reconstructed face of TV personality Roy Raymond. After his experience of being trapped in a car with an insane swamp creature, Raymond has given up his cravings for fame and fortune, and believes that he may go back to being a real detective. Suddenly, the press waiting for him outside all rush back to their vehicles and drive off. A nurse informs him that Australia is under full scale attack by aliens.
On the alien's ship, Abby's captor receives a communique from the Dominators. The alien called Widowsweed turns out to be a freelance agent in the Dominators' invasion. They thank Widowsweed for having captured Abby, and in doing so, nullified the threat that the foetus she carries inside her poses to them. When Widowsweed realizes that Abby is pregnant, she has a change of heart, revealing to her captive that she too is a mother.
Widowsweed ignores transmissions from the Dominators, taking her ship deeper into the swamps, where she finds the derelict craft left behind by her mate many years ago. She is horrified to discover that her mate is dead, and has been for many years.
Having found what she truly came to earth for, Widowsweed allows Abby to go free with Chester. She explains that she only agreed to work with the Dominators in the hopes of reuniting with her mate, and now that her hopes are ruined, she has no desire to pursue this mission. She gets back into her ship and begins to fly off.
Moments later, Green Lantern Guy Gardner appears before them. He tells Abby and Chester that he has come to recruit the Swamp Thing to help Earth's heroes against the Dominators. Chester and Abby try to obfuscate Swamp Thing's last known whereabouts, but in truth, they really don't know where he is.
Guy happens to see Widowsweed's space ship arcing upward above the skyline. Perceiving any alien vessel as a threat at this point, he blasts it out of the sky with a bolt of green energy, much to Abby's horror.
Later, Abby decides - despite Chester's protests - to continue living in her rotting tree house, and wait for the Swamp Thing. Inside, she finds the special wedding band that her husband made for her, and it gives her comfort. She is sure that everything is going to be all right.