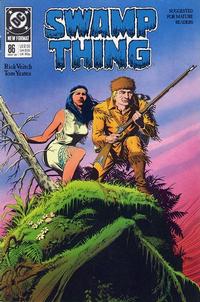 It is destiny for the aristocracy to ever triumph over the hayseed dregs of democracy!

Appearing in "Heroes of the Revolution"Edit

Synopsis for "Heroes of the Revolution"Edit

The Timestream
Time Masters Rip Hunter and Jeff Smith are travelling through the timestream, catching glimpses of pivotal points in American history using a special probe they've finally managed to get to function again. Along its path, the probe collides unexpectedly with the astral form of the Swamp Thing who, at the hands of the Dominators, has been bouncing backwards through time. Rip calculates the Swamp Thing's path and determines that he will end up somewhere in the late 18th century.

1800
The citizens of Gotham Town prepare to usher in the new year with a festival in which an exhibition showcasing famous heroes of the frontier such as Tomahawk, Dan Hunter and Miss Liberty is held. However, these are not the true heroes of folklore, but rather paid actors.

The real Tomahawk, now known by his real name, Thomas Haukins, is present in the audience. He drunkenly approaches the stage and accuses the actors as being frauds. A scuffle ensues and the actors frantically depart. Unbeknownst to Haukins, the man playing the role of Tomahawk is actually his old foe, the master of disguise, Lord Gerald Shilling.

Shilling runs outside and changes costumes. He disguises himself as Stovepipe, a member of Tomahawk's Rangers. He returns to find Tom Haukins getting thrown out of a bar, and reminds him that they must collect taxes from the Transvaal Trader before it leaves port. They paddle out to the ship and board it only to find that the ship's Admiral is the occult scholar Jason Blood.

While Haukins and "Stovepipe" conduct their business, two Apaches named Wise Owl and Moon Fawn row alongside Tom Haukins' boat. They know it is their destiny that they should be here this evening and, according to prophecy, Moon Fawn leaves a chunk of amber in Tomahawk's boat for him to find.

After discovering that the ship's cargo is human slaves, Tom gets into his boat and waits for Stovepipe. He discovers the chunk of amber, and begins to wonder about Stovepipe's comments. Tom, sobering up, recalls that Stovepipe wasn't with them on the Quebec mission and now realizes that he is being fooled.

Soon after Stovepipe returns, Tom pounces on him, revealing him as Lord Shilling. As the two wrestle against one another, the spirit of the Swamp Thing, still housed within the amber fragment, takes action. He grow two thick arms from the wooden sides of the skiff, attacking both men and dragging boat and men ashore. The boat slams into a nearby embankment on the property of Darius Wayne and they crash through into a massive cavern infested by bats.

Shilling knows that Tomahawk now has the amber artifact and because of an earlier conversation with Jason Blood, he is aware of its power. He tries to stab Tomahawk and recover the amber, but a giant bat bears down upon them and scoops Tomahawk out of the way. It drops Tomahawk near a river of strange liquid and the amber fragment falls into it. Shilling rushes over and shoves his arm into the river, desperately scrambling for the fragment. When he withdraws his arm, he finds the amber fused to his hand, and his arm desiccated and mummified. Tomahawk tears Lord Shilling's rotted arm off and races out of the cavern.

Rushing out to Gotham River, he finds Wise Owl and Moon Fawn waiting for him. He gets into their canoe and begin to paddle away. They are forced to hide, briefly, as the Transvaal Trader mysteriously bursts into flame. The demon Etrigan walks past.

Wise Owl and Moon Fawn explain the origins of the amber rock and the prophecy of the earth elemental to Tomahawk. He learns that he is destined to wed Moon Fawn and that she will bear his children.

The Present
After Abigail Holland and Chester Williams have breakfast in the Louisiana swamp, Abby finds the memoirs of Tomahawk's first son, Hawk, Son of Tomahawk. Reading the historical accounts of Hawk and his infamous father, Abby learns that the earth elemental that they met is her husband, and that he has been trapped in time.

Retrieved from "https://heykidscomics.fandom.com/wiki/Swamp_Thing_Vol_2_86?oldid=1506377"
Community content is available under CC-BY-SA unless otherwise noted.