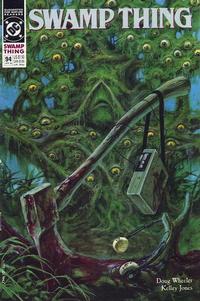 The roots recall for me the weight of the murderer standing on their backs... and the scent of his sweat in the air. But The Green is accustomed... to the offenses of man. What new abomination... could have shocked it like this?

Somewhere outside of Houma, Louisiana, a man called the Axman vows to bring Jazz to the state. Unfortunately, his method of bringing the Jazz involves brutally murdering people with a special axe. Elsewhere, a group of jazz musicians arrives at the home of Chester Williams, where they hope to stay while they prepare for their next gig during the town's Mardi Gras festival.
In the swamps, the Swamp Thing comes across the corpses of the Axman's victims. He senses that something awful was involved in these murders, as The Green is accustomed to murder - but this incident has shocked it.
On a plane of existence called The Quick, a strange creature lives to feed on the dreams and experiences of humans. Having tasted an entire human history of experience, this particular creature has developed a taste for the violence entwined with jazz. Jazz mixed with murder is what it craves.
In their swamp home, Abby Holland recalls that she and the Swamp Thing had been warned by an Inuit shaman that something would be coming after their infant daughter Tefé. She suggests that the murders he discovered might be involved. He responds that he sensed something more than human there, but that it might not be related to their daughter. He wonders if he should consult the Parliament of Trees. Abby discourages the idea, warning that the Parliament has always manipulated them. Changing the subject, she convinces him to go see the jazz show that night at the festival.
The next morning at Chester's place, the leader of the Jazz ensemble, Jimi, is unusually rude to their host. The other band members explain that Jimi's been acting weird lately, and they hope that they can talk him out of playing a song he's obsessed with that they think will go over very poorly in Louisiana.
Jimi drives to meet someone, and pops in a tape called the "Mysterious Axman Jazz," which gets him very excited. He reminisces about how he nearly turned down his benefactor's offer, until he realized how powerful the music was. He had been approached by the Axman, and given an axe which - when struck on its bloodstains with drum sticks - produced an amazing musical sound. He was given the axe on the condition that after each performance, he return it for "tuning."
That night, at the festival, Jimi prepares for the show. The axman makes him wait until he has killed again before he will let Jimi use it. As the Axman kills the woman, the creature from The quick feeds on her experiences ravenously. When Jimi returns to his friends with the murder weapon, they try to discourage him from playing the Axman's Jazz. He assures them that the people will love it because it's Jazz.
As they play the song, the creature revels in the memories of the murders that gave the axe its sound. The song is interrupted by the sound of cries of Tefé Holland, who is screaming from her mother's shoulders in the audience. As the song goes on, the creature realizes that the infant child can see him.
Abby takes Tefé out of the crowd until she can calm her, and as she stands alone, the creature directs the Axman to kill them both. As he raises his weapon over his head, suddenly, thorny vines spring forth and wrap around his body, incapacitating him. Swamp Thing appears, assuring that his family is safe. However, he senses the presence of another creature. Shifting his frequency, he finds himself in The Quick. The creature greets him, and admits that the music and murder are just the spice for his food. Swamp Thing responds that he has no right.
Some other creatures from The Quick appear, and chastise their compatriot. They state that he has shamed them by his obsession with murder, and are outraged that his actions could have drawn the attention of a biospheric protector to The Quick. Angrily, they strip him of his assignment. They explain to the Swamp Thing that they are a race of creatures which feed on human experience in the Field of the Living. The links they make through this are meant to be brief and random, but this one's obsession has led him to be corrupted by humans.
Later, the police come for the Axman, and Jimi complains that he will not have any more notes to play in his song. Swamp Thing watches as Jimi cries out due to a splinter from his axe. Realizing that Jimi was an accomplice to the murders, the Swamp Thing punishes him by having huge splinters grow all throughout Jimi's body.

Retrieved from "https://heykidscomics.fandom.com/wiki/Swamp_Thing_Vol_2_94?oldid=1461414"
Community content is available under CC-BY-SA unless otherwise noted.