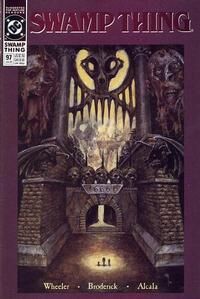 In none of my prior trips... have I encountered aliens... in earth's afterlife.... But this time... I've seen virtually nothing but.

Walking the outer edges of The Green, Swamp Thing and his companion Bartle find themselves in the Spirit World. However, since the events of the recent invasion of Earth, the afterlife appears changed.
They encounter a Daxamite named Kel Gand, who explains that they are now in the Durlan afterlife, where the shape-shifters' heaven is merely a sea where all form is lost, and their hell is a city of angular buildings, devoid of curves.
In Hell, the Demons Beelzebub and Nergal discuss what to do with the child they believe is the next earth elemental; Tefé Holland. With Nergal's taint in her blood, Beelzebub hopes that he can gain control over her. Newly recruited demon Anton Arcane makes the case for himself, noting that she is of his bloodline, and that he could help to nurture the evil within her.
In the Louisiana swamp, Abigail Arcane sits over the decaying corpse that was once her daughter Tefé. She had become so attached to the baby in her human form that seeing her discard that flesh in order to enter the green was utterly heart-breaking for Abby. Sickeningly, Abby caresses her own face with the dead child's hand, wondering how the girl will ever return to her if she doesn't keep her blood and body around.
In the afterlife, Swamp Thing and company meet Abin Sur. He explains that since the invasion, there have been significantly more alien species in the human Spirit World, having grown confused, and unable to find their homeworlds' afterlives. As a result, human spirits are having trouble finding their way through the spirit worlds.
To Swamp Thing's horror, he explains that he saw Tefé wandering the Spirit World, and sent her in the direction of Hell, because he saw the demon taint inside her. He insists that he accompany them, as atonement.
Nergal visits the Fate-Mother of the Spider Guild, who are now also in Hell. To his disgust, she has opened trade with Thanagarians, who trade outside goods in exchange for discarded human skins for their wings. When he begins negotiating the exchange for the elemental child, the Fate-Mother reveals that she intends to hold a bidding war between Beelzebub and Azazel. Nergal warns that Beelzebub is more powerful, and will not take this surprise kindly.
Meanwhile, Swamp Thing, Abin Sur, Kel Gand, and Bartle arrive at the gates of Hell. Just outside, they discover a flower, which was once planted there by Etrigan. Not surprisingly, Etrigan himself appears, and takes great pleasure in teasing what he knows about Tefé. Finally, to the Swamp Thing's horror, he reveals that she has been tainted with demon's blood, and will forever be drawn toward Hell's lure.

Retrieved from "https://heykidscomics.fandom.com/wiki/Swamp_Thing_Vol_2_97?oldid=1461420"
Community content is available under CC-BY-SA unless otherwise noted.