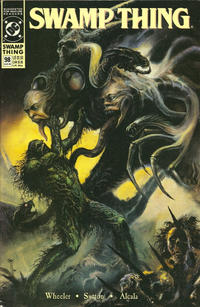 Your child is there now with her Grandfather Nergal, though given his nature, you might find her parts stuck to walls.

In the Louisiana swamp, Abby Holland mourns her daughter Tefé, whose body exploded when she entered The Green. Kneeling over the grave of her father Gregori, Abby is suprised by her father's sudden appearance. His head is an empty picture frame, so Abby gives him the little child's skull to use. Suddenly, her father transforms into her evil uncle Anton Arcane. Abby wakes from her nightmare in terror, but when she looks in on her daughter's bed, she finds the little skeleton covered in maggots.
In Hell, Anton Arcane attempts to influence his granddaughter, hoping to teach her what she can do, for his benefit. Thinking of how he can do this, he decides to show the little girl her mother's weakness by opening a viewing window to earth. He pierces her skin, and her blood fuels the spell.
Suddenly, Arcane's superior demon Nergal appears, and demands to know why his subordinate is creating a chymic window. Arcane had cast a more powerful spell than expected by using the child's power. Angrily, he condemns Arcane to the role of gardener.
On the outskirts of Hell, Etrigan explains to the Swamp Thing that Tefé has been tainted with demon blood through Nergal's contamination of John Constantine, who acted as surrogate father to the girl.
The demon Lisquinelle is assigned to lead them the rest of the way to Nergal's domain. At the Gate of Tears, Kel Gand turns back, fearing retribution from those who fought alongside the Dominators in the invasion. This leaves only Swamp Thing, Abin Sur, Bartle, and their demon guide to venture deeper.
As they pass through a gantlet of tortured souls warning against escape, Lisquinelle explains that they are safe from discovery because the demons of Hell are rebelling against each other. He leads them until they reach Nergal's Duchy of Mashkan-Shapir. Having led them this far, Lisquinelle leaves them to go the rest of the way.
Nergal hooks Tefé up to his irrigation system - which runs on blood - hoping to gain more power than even his superior Beelzebub has. Arcane slinks into Nergal's quarters, worrying that the amplification of the girl's presence across the city will act as a beacon to the Swamp Thing.
Soon after, the Swamp Thing and his allies arrive. Exerting his own control over his garden, Nergal traps the Swamp Thing in vines, while he skewers Abin Sur with a scythe, and slices him in two. Bartle is knocked unconscious by a blow to the head.
From behind a pillar, Anton Arcane realizes that he will never advance in rank with Nergal over him, and plots his master's downfall. He plots that if he tells the diminutive Bartle to show Tefé how to open a Chymic window, the girl's escape will reflect poorly on the demon.
After Barlte does so, Beelzebub appears, and explains that with Tefé connected to the whole city's irrigation system, her powers will cause the window to envelope the entire city, and destroy it - not to mention the loss of a powerful tool for him. Soon after, the city explodes with all of the involved still inside.
Later, Bartle returns to his own afterlife, and reflects on the plights of his recent companions. Abin Sur leaves in search of his own people's afterlife. The Swamp thing returns home to his wife with his daughter in tow, and they all embrace happily.

Retrieved from "https://heykidscomics.fandom.com/wiki/Swamp_Thing_Vol_2_98?oldid=1461422"
Community content is available under CC-BY-SA unless otherwise noted.