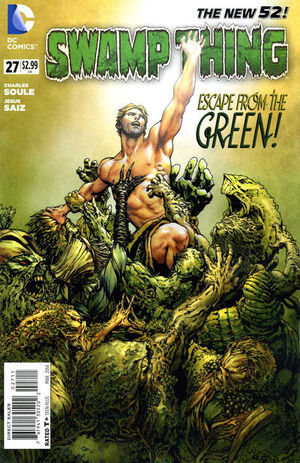 The other kingdoms will retaliate -- The Red, The Rot -- They will fight. You will need a strong champion to defend your planet. I am he.

Appearing in "My Green Heaven"Edit

Synopsis for "My Green Heaven"Edit

Since losing his battle against Woodrue for the title of The Green's avatar, Alec Holland has been confined within the Green, and his teacher, The Wolf, assures him that it is quite impossible for a retired Avatar to leave. This news is all the more frustrating, because Woodrue is out there killing people. Alec feels responsible, because despite winning the real battle, the Parliament deemed Woodrue the victor because Alec refused to kill him. No man who knew so much about the Green could be left alive and unchecked, so the Parliament of Trees chose Woodrue as its champion over the man who refused to do their bidding.

Wolf suggests that the Seeder's activities are no longer any of Alec's concern, and reminds of the pleasures the Green can offer. He conjures plant-constructions of the women in Alec's life - Abby and Capucine - noting that whether the constructions are real or not, they can satisfy him. Alec rejects the illusions as obscene, so Wolf takes another tack. He offers a fruit, which, by its consumption, would allow Alec to sleep and dream of flowers, seeds, and sun, only to wake long after the Seeder's time has ended. Grumpily, Alec crushes the fruit in his fist, demanding a way to get back to reality. Annoyed, the Wolf explains that he wouldn't know, but both of them know someone who might.

That person is the Lady Weeds, who is glad to see Alec, if only to taunt him for failing to kill off Woodrue. Demanding help, Alec is reminded that she will not do so for free. Alec suggests that instead, she could just offer information, and explains his need to leave the Green. Dismissively, she suggests he kill himself. Annoyed, he explains that he needs to get back to Earth. Cryptically, she responds that while there may be a way, it could result in a permanent death, with no Green waiting at its end. And the way to do it is already known to him. He must go to where the Green touches the earth most closely - the Parliament of Trees.

Confused, Alec wonders if he is meant to be elected to the Parliament, and dismissively, she reminds that his reputation for weakness is so well known that he couldn't possibly get the votes. Instead, she suddenly severs the retired avatars' connection to the trees in the Parliament's grove, waking them. She explains that she had planned this for some time, but never had the allies she'd need to beat the Parliament. They must win against the enraged Parliamentarians or die. After all the horrors the Parliament has put Alec through, he can't help but relish the thought of crushing them.

Unfortunately, the Parliament is strong, but Alec is not as weak as they imagine him to be. Soon, their underestimating him sees them fall, and he opens his connection to the ring of trees above, closing it off behind him so that Lady Weeds cannot follow. Her ambiguous morality cannot be allowed to run freely on Earth.

Still, once he emerges on Earth, Alec realizes quickly that he has no power. He is merely a tree, and Lady Weeds is trying to pull him back down into the Green. Seeking any way to remain above, Alec calls on the only source of power he can think of: Woodrue. He calls out, and the Seeder answers, angered to see that the other trees of the Parliament have died. He demands to know who did it, but when he sees that the only remaining tree alive is Alec, he has his answer.

Alec reaches out, wrapping vines around the human spine buried within the Seeder's wooden shell, assuring himself that he can help heal Woodrue later, if his plan succeeds. Syphoning the Seeder's power, Alec causes the algae in the ocean to grow exponentially, filling the waters with plant life, and offsetting the balance between the Green and the other kingdoms such as The Red. Challenging the Green, Alec announces that he no longer cares about balance - only for victory. The other kingdoms will retaliate, and the Green will need a strong champion to defend it. He is that champion - if they will give him his title back. Seeing his actions, the Green assents.

At last, Alec's role is returned to him, but Woodrue's human body is dying, as Alec's fist is buried in his chest. Carefully, Alec sends Woodrue's body to the Green, knowing it will be the only way to save his life. With that done, Alec turns his attention to the other former avatars. So long as they are awake, they will continue to challenge his role. Reaching into the Green, he sends them into their dormancy, and declares himself - once again - the only Avatar of the Green.

Retrieved from "https://heykidscomics.fandom.com/wiki/Swamp_Thing_Vol_5_27?oldid=1461726"
Community content is available under CC-BY-SA unless otherwise noted.