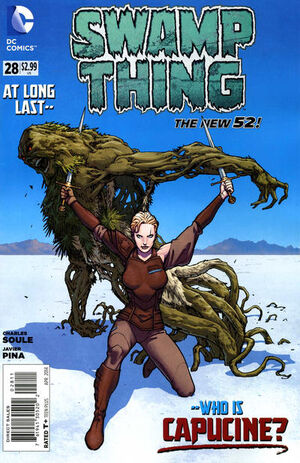 You have nothing left to prove to me, Capucine. All I want is your story.

Appearing in "Salting the Earth"Edit

Synopsis for "Salting the Earth"Edit

Swamp Thing has thrown off the balance between the elemental forces of the Earth, taking the planet for The Green in a coup to regain his status as Avatar from Jason Woodrue. Upon regaining his power, he sent the Parliament of Trees down into the Green, eliminating their dominion over him. In the process, though, he brought several former avatars back to the real world with them, and they have reverted to human form. Having severed the connection of every previous Avatar from the Green, he had to save those who had helped him, and this was the only way to do that. Unfortunately, they are not pleased to have lost everything except their lives.

The Wolf, in particular, is displeased with the situation, but another man is more grateful. Alec doesn't recognize him, and the man explains that he was the Avatar whom Alec had asked about the Sanctuarium Folium Viride. Though Woodrue had sent him into his winter, he survived to be brought back by Alec as a man. He choooses the name Brother Jonah, which had been his name before he became an Avatar. With two of the three awake, Alec turns his attention to Lady Weeds, but when he looks to where she had lain, she is gone. Fortunately, a tree warns him that she has taken residence in its branches, and it wants her out.

When Alec spots her, she has just killed a snake, and she claims that she did it because it got too curious. She wonders why he saved her, given that he chose not to bring her with him when he ascended through the grove. Alec responds that he had not intended to save her, but she had been brought along all the same. Slyly, she claims she is at his mercy, then.

Alec's first order of business is to house his guests in the house his predecessor had built for Abby Arcane. Inside, there would be clothes and food. While they avail themselves of those, he must go out to find something. Before agreeing to stay, The Wolf reminds that they are new to this world - at least in this age - and they must have the need to explore and learn satiated. Before they will stay put, he has to show them something of the world as it is now. After clothing them, Alec takes the three to a Mardi Gras parade on New Orleans' famed Bourbon Street.

After a good party, Alec leaves them at the house with Brother Jonah in charge, admitting that he is seeking Capucine. Once alone, he reaches into the Green and searches for signs of her. Unfortunately, he finds none, and decides it would be best to return to where he saw her last, and search from there. This leads him to the Bonneville Salt Flats in Nevada, and he realizes with amusement that she has chosen her hiding place wisely. Plants cannot grow on salted ground.

Upon sighting her, though, she launches a rocket at him without even hearing him out. Struggling to reconstitute a body from what little Green she left, Alec catches a break when he finds a small piece of greenery caught in the teeth of one of the rabbit carcasses she had planned to eat. He explains that he is not Woodrue, and that the usurper is gone. In fact, there will never be another Avatar. Capucine is relieved, promising to prove herself to him in exchange for his sanctuary. Alec responds that she no longer has to prove herself - he just wants to know her story.

Capucine explains that she was born in the year 1114 on the isle of Mont St. Michel in France, home to an monastery. Because of its location on the Normandy coast, it was frequently under attack by the French, the Flemish, and the English. The island had been under the control of the English at the time of her birth, under the rule of Henry I of England. But the monks tired of their island being fought over, and sought freedom from the whims of kings.

Though it was clear that these kings were more interested in the island itself than the monastery upon it, a man appeared who explained that they could use a trick of alchemy to give the kings what they wanted in a bargain without seeing the monks and their monastery destroyed. Unfortunately, his formula would only work on youths. Among the youths they found were Capucine, her brother, and another. The stranger's gift gave them 1,000 years of life and enhanced strength and speed. They were trained to protect the monks, while the monks would teach them learning. They were unaware of the rest of the Monks' bargain. Soon, the kings heard tell of the warriors who could best anyone in a fight, and they were sought out. The king came and swore he would raze the abbey if the three knights did not leave with him. By then, the king was Philip II of France of France. For centuries they served that king's legacy, until she was alone. The peasants killed the king in 1793, and she was released from her oath. In the meantime, the other two knights had been lost.

Freed, Capucine saw what parts of the world she had not yet seen, meeting, loving, and hurting many along the way. Eventually, her legend spread, and a bounty was placed on her head. These days, mercenaries make an attempt on her life on what seems a weekly basis. She does not fear them. What she still fears, though, is the stranger who set her long life in motion. She does not believe he was a man, and she has learned that the monks promised her to this man at the moment of her death. She has also learned that the man was a demon - and she does not want to serve a demon. Though it cost her a great deal to learn that demon's name, she knows now that he was Etrigan, the rhymer.

Long ago, one of Alec's predecessors had promised his protection to Capucine, and while she will not hold him to a predecessor's promise, she asks that he help to ensure that her final rest is not in service to a devil. Alec responds that he will.

Together, they return to the house, and Capucine is impressed at Alec's having defeated the Parliament. He warns of the three he saved, noting that things did not work out as he'd expected. Further to confuse his expectations, Alec arrives home to find a gathering of oddly dressed humans announcing that they are the Sureen, come to make his fondest dreams come true.

Retrieved from "https://heykidscomics.fandom.com/wiki/Swamp_Thing_Vol_5_28?oldid=1461728"
Community content is available under CC-BY-SA unless otherwise noted.