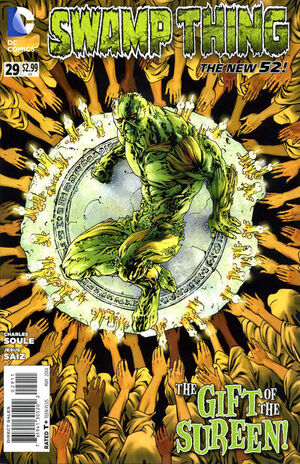 I see why the Parliament kept this a secret. If new Avatars knew they could stop being the Avatar, even for a little while, some would take a human body and never come back.

Appearing in "The Gift of the Sureen, Part 1"Edit

Synopsis for "The Gift of the Sureen, Part 1"Edit

Just outside Louisiana, The Wolf and Lady Weeds are not pleased with the accommodations they were given by the Swamp Thing after they were ripped from The Green, and forced back into human bodies. They are insulted to have been brought back without any purpose and without any power. Though they lack the power of The Green, Wolf does have some money that he left behind when he became Avatar which may since have become worth quite a bit - providing them a different kind of power. And though Alec has been watching them like a hawk, they suspect he will soon be quite distracted.

That distraction has come in the form of the Sureen, an organization whose sole purpose is to attend to the needs of the Green; to do the kinds of things that only a human can do. While Alec is perturbed by their appearance outside his home, Brother Jonah is glad to see them, and surprised to see Capucine beside Alec. She does not recognize him, but he explains that long ago - in another form - he had offered her Sanctuarium Folium Viride, though she had not taken it at the time. Finally, she realizes that he was one of the Avatars that had helped her in all her years of immortality, and embraces him.

Jonah explains that the Sureen can be of great help, but the Parliament of Trees had long ago walled off the collective memories of these worshippers from those of newer avatars. They had wanted to keep the Sureen's abilities secret. In any case, he promises that there is much to gain from the Sureen, and urges Alec to go speak with them.

On the streets of New Orleans, Wolf makes the mistake of approaching a dancer on the street in hopes of finding a solicitor. Unfortunately, she doesn't realize that the word also means a lawyer, and slaps him, thinking he believes she's a prostitute. Uncomfortably, he comes to understand that this is a complicated time.

A Sureen called Knot approaches Alec and explains that while they ask nothing in return for their worship, certain avatars have seen fit in the past to offer them the gift of something called the "spring sacrament." Before he will hear what that entails, Alec asks a question. Why had they not come to find him sooner? Knot explains that for many years, it had seemed to them that there was no Avatar of the Green - at least not a human one. It had only been when he became the Avatar that they realized they were needed again. Satisfied, Alec asks about their ritual, and learns that they require a particular fruit to be grown from his body, which, when eaten, would produce the psychotropic experience of being close to the Green. Curious, both Jonah and Capucine partake as well. With the humans occupied by their ecstasy, Alec turns his attention to the two other former avatars who are supposed to be in the house behind him.

In fact, Wolf and Lady Weeds have found a lawyer, but despite his promise of lavish payment, the man is not eager to work on spec. Grimly, Wolf warns that if - in fact - he is a man of great wealth and means, and this man has turned him down, he will ensure that the lawyer loses everything. Leaning seductively next to the man's ear, Lady Weeds promises that when he loses everything, she will be the one to take it.

Soon, Alec realizes they are gone, and wakes Capucine and Jonah from their dreaming. Jonah warns that it is not in Alec's interests to imprison his companions. Alec responds that because they are so old, the world as it is will be strange to them. They will stand out. He begs the pair to go and retrieve Lady Weeds and Wolf. Capucine readily agrees, and Jonah decides to accompany her, but before leaving, Capucine warns Alec to be careful with the Sureen. They know much more about him than he does about them.

When night falls, Alec wakes Knot, and asks exactly what the significant thing that the Sureen can do for Avatars is - the thing the Parliament wished to conceal. Woozily, Knot responds that it is the Locum, a sacred ritual by which Avatars can temporarily be shifted into the body one of the Sureen, freeing them of the responsibility of guarding the Green, if only for a short time. It is, in fact, the Sureen's primary function. Interested, Alec asks Knot to tell him everything.

Around a fire, Knot gathers the other Sureen and explains that all Alec has to do is choose the one he wishes to occupy, and they will do the rest. He assures Alec that the one he chooses will not suffer pain, and will merely lie dormant while he is controlled by the Avatar. The others confirm that they would happily give themselves up for this. Alec's own body, Knot promises, will be protected with their very lives, and all he must do to return to it is jump to a nearby plant.

Nervously, Alec selects a Sureen named Pistil, who drinks a potion which Knot explains will make him more receptive to Alec's consciousness. Then, Alec sends out a seed to touch Pistil's mind, and grow in it. Once Knot is sure Alec has entered Pistil's body, he closes the man's eyes, and lays him down on the ground. Hurriedly, he removes his false beard and disguise, warning his companions that they have little time to waste, should Alec find a way back to his body.

In New Orleans, a newly moneyed Wolf watches as Lady Weeds gets her first tattoo. Reluctantly, the artist warns that the design she wants is so drastic that she will never be able to pass with the "normals" again - and besides that, it will hurt. Calmly, she responds that she cares about neither, and orders him to do it. Once done, the pair will get to business.

From within Pistil's body, Alec can feel the heart beating, and his lungs breathing. He has the sensation of the grass on his face. He understands now why the Parliament would keep this secret. If any Avatar knew they could give it up, few would return to their duties. He notices, with a start, that his heart is beating unusually fast, and is disturbed as he vomits up blood. He has been poisoned, and the Sureen have begun burning down his house.

Retrieved from "https://heykidscomics.fandom.com/wiki/Swamp_Thing_Vol_5_29?oldid=1461730"
Community content is available under CC-BY-SA unless otherwise noted.