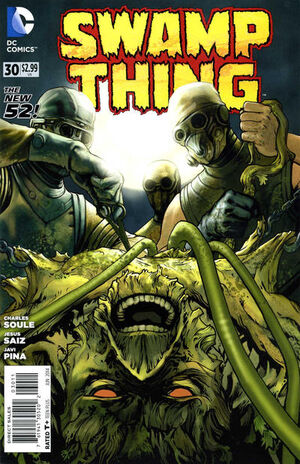 Neither one of us is particularly conversant with aging, Capucine. It is lovely to see you. Who is your sickly-looking friend?

Appearing in "The Gift of the Sureen: Part 2"Edit

Synopsis for "The Gift of the Sureen: Part 2"Edit

The Swamp Thing's body has been transported to Germany, where it has been promised that his body will allow his new owners to do everything they desire.

Meanwhile, in New Orleans, Lady Weeds is more than satisfied with the elaborate tattoos she covered her human body with. Wolf, meanwhile, has acquired the funds that he set aside long before his transformation into an Avatar, and is now quite rich. Though he has plans as to what to do with that money, they are visited by Brother Jonah and Capucine, whom Alec had sent to find them before he underwent the rite of Locum with the Sureen. Capucine declares that they should return to Alec's side - whether they want to or not. Feigning pleasantry, Wolf explains that they would be happy to return as family, though he and Lady Weeds would rather enjoy their new lives.

Upon their return to the house in Houma, they discover that Alec's old house has been set on fire, though the swamp's dampness ensured that the fire burnt itself out. Capucine is troubled, as the Avatar would not likely have allowed the house to burn, as it was special to him. Meanwhile, the Sureen appear to have gone - and Alec himself. Capucine turns to Brother Jonah for help in determining just what happened there. Aside, Lady Weeds demands to know why Wolf agreed to return to this place, and he admits in confidence that he has already set a plan in motion, and their role in this place is not yet done.

Capucine spots the body of Pistil lying in the grass, noting that he has been poisoned with belladonna. She demands that Jonah find her a stimulant plant, and feeds it to the Sureen, stomping on his chest to wake him. He is unsure of what happened to him, so Capucine fills him in that he was poisoned, and may repay the debt of saving him by answering her questions. Firstly, she asks where the Avatar has gone. He responds that he is Alec Holland, and wonders where the Sureen have gone. Capucine doubts him, so Alec tells her what secrets he knows of each of them. He explains that he had intended to try the Locum as a quick test, but apparently the Sureen turned on him and stole his body.

Upon his reintroduction to Lady Weeds and Wolf, the former wonders how Alec feels, and he responds that he feels weak. Smirking, she responds that now he must know how she feels. When he sees the house that he built for Abby burnt, he is despondent, ignoring the worries that the others have about what his Avatar's body might be used for by the Sureen. Wolf explains that the Locum burns the host out. If Alec cannot return to his body within a matter of days, both Alec and Pistil will die. Capucine suggests that she has a friend with an interest in the mystical who may be able to find the Sureen: Vandal Savage.

Soon, Vandal has arrived, happy to see Capucine, whose skill in killing he admires. Grinning, she introduces him to Alec, good-naturedly reminding that Vandal cannot be trusted. To business, she explains that she needs to find the Sureen. He remembers them, and knows exactly where they are - but the price will be steep. He wants Capucine - to spar with. Sighing, she agrees to that price, defeating him quickly and declaring that the price has been paid. Agreeing, reluctantly, Vandal explains that the Sureen are in India, and he will gladly give them the use of his jet. He will walk home.

Soon, Alec and Capucine are in Bangalore, having been directed to a particular temple. Upon their arrival, they find only an elderly man, who assumes they are lost. When the man sees who has come, he becomes angry, slashing a knife through Alec's arm. Alec is confused and pained, but the man points out that the wound is growing plants from it. He explains that he is the last Sureen alive. That is how he recognized the Avatar. However, the Sureen that Alec used to perform the Locum were imposters. He is the only true Sureen left.

Meanwhile, the Swamp Thing's body is being examined by two men named Norren and Hoch. They have learned that the substance of the body act like stem-cells in animals, only for plants. Any part of it is capable of transform into any type of plant cell, known or unknown. By consuming the fruits from Alec's body, they have been able to control the substance's growth, creating new plant life. Unfortunately, no human has been able to survive the process, once complete.

Alec is despairing with the knowledge that they are no better off than they were before, now. The old man explains that there may be an option that can delay the withering that will soon affect Alec and Pistil's body. He asks a young woman named Miki to join them, suggesting that while he searches for that option, she should take him out on the town, to relax him.

She agrees, gladly, and by evening, they are enjoying drinks together. She is aware of his true nature, having learned from Master Guarav - the old man - as his assistant. He admits that this whole scenario is ridiculous to him, given that he'd already given up on ever being human again. He had accepted his fate as the Avatar. The moment the chance had been dangled before him, though, he took it. Miki wonders if Alec would take the opportunity to remain in this new body, if he could. Alec is interested, but a sudden bout of violent, bloody coughing leads him to decide they should return to the temple.

Upon his return, Guarev suggests that Alec get some sleep, but as he struggles to do so, Alec is visited in the night by Miki. She kisses him, but as they kiss, Alec feels his own mossy tonue being massaged by something strange - something fungal. Disturbed, he wonders just what Miki is, and smiling, she responds that she is just like him. After all, the Sureen do not offer their gifts to just The Green.

Retrieved from "https://heykidscomics.fandom.com/wiki/Swamp_Thing_Vol_5_30?oldid=1512533"
Community content is available under CC-BY-SA unless otherwise noted.