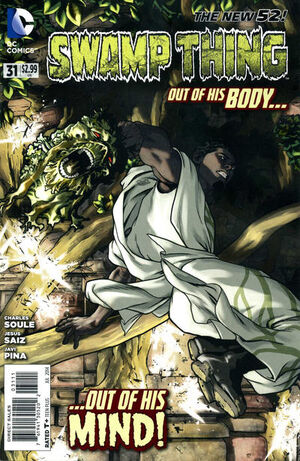 There. Okay. It's not about seeds and light and water. It's about darkness. Damp. Spores. Still growth, just a different kind of growth.

Appearing in "The Gift of the Sureen, Part 3"Edit

Synopsis for "The Gift of the Sureen, Part 3"Edit

Alec Holland is disturbed to learn that Miki is a former Avatar of a force called The Grey, whose domain is all fungal life. She explains that she has been using the Locum - the gift of the Sureen - to survive in a human body for years. Alec, though, has only been trapped in Pistil's body through the Locum for days, and already he can feel it dying.

Miki confides that there is a way to prevent his inevitable death. She claims that over time an avatar can learn to temper their power such that the transfer does not kill the host - to the point that one could remain in possession of the body nearly indefinitely. She, for example, has been doing it since the 16th Century. Pressing against him, she explains that the reason that the Grey has not been in conflict with The Red, and The Rot in all that time is because she had a life to lead. As far as she is concerned, fungus can fend for itself - and so can plants, she suspects.

Meanwhile, in Germany, the imposters who stole Alec's plant body are trying to tap into its power, in order to interface with The Green. Past efforts failed miserably, but now they are trying a direct approach, directly grafting the plant-matter onto the body of a test subject. These imposters had posed as the Sureen in order to get access to the Green and manipulate plant life - particularly agricultural grain products - in order to increase demand for their company's blight-resistant seed. They are not above killing fields worth of crops in order to do that.

Miki is excited about the possibility of sharing her life with another avatar, but Alec is worried about the prospect of having to kill hundreds of hosts so that she might live. She responds that almost all of the hosts were volunteers. The word "almost" troubles Alec, but he pushes his doubts aside, instead asking her whether she keeps her Avatar body close by. She admits that she does, and that they could both use it to transition bodies, if necessary.

Embarrassed, Miki shows Alec the body that she used to inhabit, and Alec realizes that it is a male body. She responds that gender ceases to matter, eventually. Alec wonders if Guarav - the last remaining of the real Sureen - could transfer him into that body. Guarav, though, has only ever studied the Locum; never performed it. Capucine is troubled by the suggestion that Alec might continue to jump from host to host, reminding that allowing hosts to die for his sake is not in keeping with what she knows of him. Taking her aside, Alec whispers that being transferred into this body will at least save his current host's life.

Soon, the transfer is made, and after figuring out how to control The Grey in a basic way, he turns on his former host and demands to know who he is and why this was done to him. Pistil explains that his real name is Hans Leider, and he works for a company called D.W. Ag. The plan was to take the avatar's body to a research facility near Dresden. Alec responds that while he now knows who and where, he needs to know why.

In Germany, the scientists at D.W. Ag explain to their superiors that they have roughly 40% of the earth's cropland under their control, and releasing plague upon it will cause significant casualties - but acceptable casualties. Soon, they get the OK to begin disseminating the plagues, and across the world, whole fields of grain die.

Alec finds travel through the Grey disorienting. The Grey itself is a lonely realm. There is no parliament, and there are no prior avatars. He can understand why Miki would leave it, without any guidance. The Grey merely expresses this roiling, uniform need. Alec understands now, that this is the same need that the Green feels, since he destroyed the Parliament of Trees, and he resolves that he must find a solution for it if he survives this.

Upon finding his destination, Alec selects the bread-mould growing in one of the lab's kitchens, growing into a man-sized mass of penicillin. Horrifying the nearby scientists, he demands to know where the plant body is, drawing the attention of the armed guards. Unsure of how to fight back without killing, Alec carefully unleashes a blast of spores at them, making them cough and splutter. Thrusting past them, he discovers his body wrapped around a corpse, and wonders what horrors they had attempted. Regardless of what they were doing, he is sure they are monsters. Tearing the plant matter from the man's flesh, Alec warns the guards that he will be tearing the entire facility down in three minutes, and offers them the opportunity to escape before a giant mass of fungi and mushrooms rip through the very foundation of the building and tear it in two.

Back in India, Alec wonders what can be done to get him back into his green body. Guarav explains thart it cannot be done without a Human host to act as middle-man, but Hans is too weak from the last transfer to likely survive. Capucine offers herself, but Alec is concerned about her unique physiology and denies her the opportunity. Confused, Miki wonders why he wants to get back into his old body - there is no shortage of humans to inhabit if they are to live forever together as she planned. Alec responds that her leaping from life to life must end now.

To her horror, Alec wraps her in fungal growth, restraining her, and forcing her to act as his conduit. He warns Guarav to switch him into his body before Miki has a chance to orient herself as the Avatar of the Grey. Angrily, Miki struggles, but soon the switch is done, and her human body decomposes instantly. Enraged, she attacks Alec, and he is disoriented enough given the screaming of the Green, for reasons he has not yet come to understand. He senses the damage though, as he thrusts Miki against the wall. He chides that what she had been doing was wrong. As Avatars they are not gods, and humans are not vessels. He had felt the need of the Grey while he inhabited it, and it is high time she did her job. He has killed more than one avatar in his own short time as one, and if she refuses to act as she's supposed to, he will ensure that someone else takes her place. Turning then to Capucine and Guarav, he declares that it is time for them all to leave, before Miki escapes his entanglements and makes good on her grudge.

Back in Louisiana, Wolf oversees the repair of Alec and Abby's old house in Houma, explaining to Lady Weeds that doing so will ingratiate them with Alec, incurring obligation. He is disturbed, however, to learn that his plans for D.W. Ag have gone awry. Brother Jonah, meanwhile, smells the scent of sea salt on the air, and is surprised when Aquaman appears riding a wave through the swamp, demanding to know who the Avatar of the Green is.

Retrieved from "https://heykidscomics.fandom.com/wiki/Swamp_Thing_Vol_5_31?oldid=1461735"
Community content is available under CC-BY-SA unless otherwise noted.