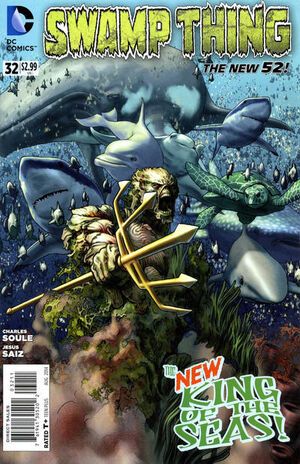 Plants pre-date people down here by billions of years. This is my kingdom more than it is yours. For the moment, I'm happy to share. But don't push it.

Having learned of a plant-anomaly in the South Pacific from Aquaman, Swamp Thing is now in the Apo Reef near the Philippines, where he has decided he needs to spend more time with the aquatic plant-life there - they speak to him differently. However, his primary focus is the massive clump of algae that has been growing and killing every animal that comes near it. And it won't speak to him at all. As he attempts to get closer to it, it grabs him, and he realizes that it will kill him if he doesn't pull back. When he does, though, he finds himself skewered by Aquaman's trident. Angrily, the man warns that he is ready this time.

Earlier, Alec had asked Brother Jonah what he knew of Atlantis, but he knew nothing, surprised it was real. Moving on, Alec explained that some kind of Algal Bloom that he had caused has been behaving like it has agency, killing every non-plant it encountered. He couldn't feel it in The Green, though. This, at least, Brother Jonah knew about - but rather than explain, he decided it would be best to call the other former avatars to discuss it.

Derisively, Wolf explained that Alec's foolishness had won him a Cruciferous vegetables. This is the consequence of destroying the Parliament of Trees. Despite Alec's low opinion of them, the Parliament had done more than merely squabble. It had maintained the stability of the Green. The Avatar acts as guardian, but the Parliament acted as manager. A Kreuzblütler is an offshoot consciousness, a barely sentient plant mind that wishes only to consume and grow. The powers of an avatar cannot touch it, and the Kreuzblütler sees him as a threat.

Now, Aquaman calls a herd of Dugongs to eat Alec, which prevents him from reconstituting himself. In the meantime, he sends a school of fish to eat the algae of the Kreuzblütler, but the creature destroys them. Taking the form of a small piece of vegetable matter, Alec warns Arthur that the plan won't work. He needs to be allowed to take care of the problem himself, and he needs Arthur to stop treating him like an enemy.

Alec reaches out and finds himself in another Green - the Green belonging to the Kreuzblütler. The name translates from German to "Crossblossom" - which is when a portion of the Green splits off and forms a pocket reality. It knows everything Alec knows, but he doesn't know what it knows. Suddenly, Alec faces a monster of the Kreuzblütler's creation - its own attempt at an avatar. Fortunately, it is not a very well devised avatar, and Alec believes that he can defeat it.

In the meantime, Arthur attempts to destroy the thing himself in Alec's absence, but learns that he is no match for it. So, he calls to Neol for backup, seeing no other option but to burn the area clean with missiles - at the cost of uncounted species' lives. Suddenly, Alec gains control of the algae blob, and warns Arthur to hold his attack. He hopes that the creature will not come back, though Arthur doesn't trust him. Alec responds that Arhur tried to have him eaten and blown up - the fact that his kingdom still stands is testament to Alec's trustworthiness. Aquaman states that while that may be so, the people he protects are his responsibility, and Alec should not enter the ocean again without his permission. Alec reminds that the plants of the sea predate the Atlanteans by billions of years - but he is happy to share.

Returning to Louisiana, Alec demands that the former avatars tell him everything. He is sick of surprises. Wolf responds that the destruction of the Parliament also destroyed billions of years of collective knowledge - for which they are no replacement. As far as Lady Weeds is concerned, he brought it upon himself. Jonah cannot help but agree that Alec has made his own bed. Alec responds that even without the Parliament, he has the three of them to rely upon. Knowing that the gesture will largely be symbolic, Lady Weeds produces a knife and thrusts it up through Alec's skull, warning that he does not have them, and he never did.

Retrieved from "https://heykidscomics.fandom.com/wiki/Swamp_Thing_Vol_5_32?oldid=1461737"
Community content is available under CC-BY-SA unless otherwise noted.