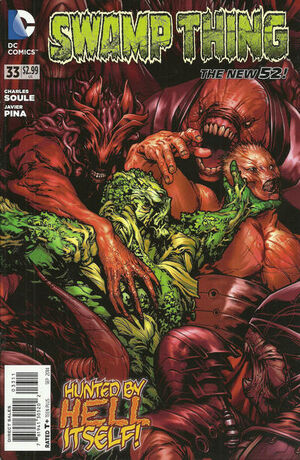 I don't see you living up to your end. I see you buying fancy clothes. I see you flapping around like a pigeon with both its wings broken. I see you settling in to this horrible, powerless life. I see you failing.

Appearing in "The Wolf and the Lady, Part One"Edit

Synopsis for "The Wolf and the Lady, Part One"Edit

In his grove within the Louisiana swamp, Swamp Thing grabs up the Lady Weeds warning that if she has turned against him after he made the effort to save her, he will not hesitate to send her back down into The Green and into dormancy. The Wolf warns that while the Lady Weeds can be difficult, it was Alec who brought her there, and removed her from her paradise destroying it thereafter. He reminds that both he and Brother Jonah are going through the same frustration, but that they will endeavour to help her acclimate. Relenting, Alec turns to his captive and warns her that he would like to see her gone, but will help her - but she must choose whether to stay or go. She responds that she will stay, and though Alec doesn't trust her, he sets her down.

The Wolf suggests that it's high time Alec checked to see how the Green is doing - physically. A direct connection would give him a full picture of the Green's health, as the avatar. Stepping into the grove pool, Alec immediately senses the Green's screaming. Plants the world over are dying, and he can't imagine how he failed to notice until now. To compensate, he leaves a small piece of himself at the pool's edge to keep tabs on the Green while he tries to tend to it in person. In the meantime, he warns his three companions to stay at the house, admitting that it is not ideal for them, but promising to resolve their concerns upon his return.

With Alec gone, the Lady Weeds complains to Wolf that his plan nearly got her sent back into dormancy. He had promised that he would find a way to install her into the Avatar's body. In exchange, she would return him to the Green as the sole member of the Parliament of Trees. Instead, he had merely been feathering his feather his own nest with the trappings of humanity. Wolf confesses that it isn't easy to plot the downfall of the most powerful being on the planet. He begs her patience. In the meantime, Lady Weeds is annoyed to be left behind with Capucine around. She finds the woman's devotion repulsive. The Wolf responds that he has a plan to remove Capucine from the equation, but it involves the injection of a substance that will change the Lady Weeds' form significantly. There will be no going back once she uses it. He adds that he has made progress she is not yet aware of, and offers his explanation.

While they all visited Mardi Gras in New Orleans, he killed a woman in an alley and used her phone to arrange the fals Sureen's arrival. While they failed to bring his full plan to fruition, the result of Alec's attempt to combat it unleashed a new enemy in the form of the Avatar of The Grey. The Wolf had also ensured that Alec thought him a fool, so that he would underestimate him. Alec's surprise at how poor a state the Green was in was engineered by him. He has been secretly working to upset the balance of the Green without Alec noticing until now. When he did away with the Parliament, Alec cut off his support group, and now, as an inexperienced Avatar, he will find these multiple threats hard to handle alone.

The only allies who remain for Alec now are Jonah, Capucine, and old Guarav. Jonah is impressed by Alec's creativity in leaving the small part of himself to maintain an eye on the Green. Guarav admits that the Sureen has passed down stories of the Avatars, and it is clear that each uses the power of the Green differently. Capucine worries, though, that Alec may be stretching himself thin with all of these threats arising. Jonah admits that destroying the Parliament was a mistake, but he has thought of a way to help. In the meantime, though, he can only marvel at how much the world has changed since he was last walking its ground. The Wolf and the Lady Weeds hate that things have changed, but he embraces it. Capucine remembers that when she had known him back in his early days, he had been the same way. After a pause, she admits that she is dying. She can feel whatever gift that extended her life fading. Jonah suggests they focus on the time they do have.

The Wolf explains that he is trying to exhaust the human aspect of the Swamp Thing. While Alec has limitless power as the Avatar, his human mind and spirit are limited. When he is most vulnerable from being worn down, they can change their strategy. The Wolf has ensured that at every opportunity, Alec will be under attack by his agents, always ready to drag the Avatar away from the tasks he must complete, if he is to remain responsible to the Green. Even as he speaks, one of these agents returns. The Wolf demands details on how Alec was killed, but the creature simply returns his fee. Alec could not be stopped. He was too strong.

Later, The Wolf remains confident that he can achieve greatness in this world - but he doesn't want to. He simply wants his life in the Green back. The Lady Weeds responds that this last was not merely a setback - it was a failure. And so, it shall be her turn, now. With that, she injects the syringe he gave her into his neck.

Elsewhere in the old house, Jonah and Capucine are sharing their bed - the first time for Jonah in nearly eight hundred years. They hear a thump from The Wolf's room upstairs, and Jonah determines that he will check on them - if only to protect her from the sight of the pair of former avatar's potential coitus.

When he opens their door, he is horrified, but he has little time to utter any words before he feels his gut sliced open.

Retrieved from "https://heykidscomics.fandom.com/wiki/Swamp_Thing_Vol_5_33?oldid=1614842"
Community content is available under CC-BY-SA unless otherwise noted.